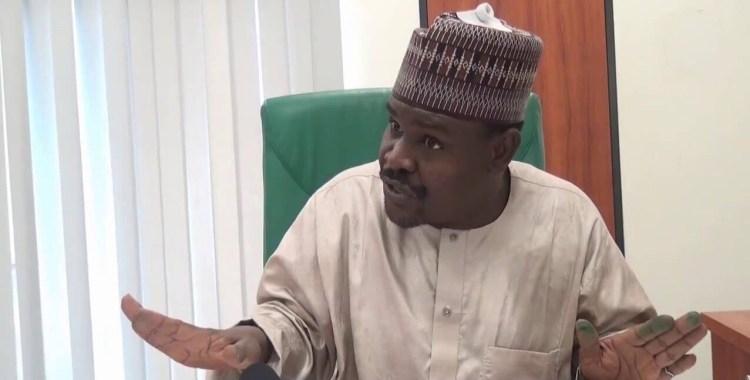 The governor of the Central Bank of Nigeria, CBN, Godwin Emefiele, has demanded N500 million damages for alleged defamation of character by Gudaji Kazaure.

Mr Kazaure, who is a member of the House of Representatives, representing Kazaure/Roni/Gwiwa/Yankwashi Federal Constituency, had claimed that over N89 trillion of stamp duty charge was missing from CBN’s purse.
The lawmaker who claimed to be the secretary of a presidential committee on recoveries and reconciliation of all stamp duties, had accused Mr Emefiele, in connivance with some government officials, of trying to truncate the efforts of the committee to recover the money

In swift reaction, a presidential spokesman, Garba Shehu, had denied the allegations, saying the figures quoted by Mr Kazaure were figments of his imagination.
The presidency also said the committee, which Mr Kazaure claimed to be the secretary, had since been dissolved and replaced with another one chaired by the attorney-general of the federation, Abubakar Malami.

But in a Facebook Live interview on Sunday with a VOA journalist, Nasir El-Hikaya, Mr Kazaure disclosed that the CBN governor, through his lawyer, had asked him to retract the allegations within three working days or face legal action, this according to a Daily Nigerian report.
I received a letter from Mr Emeifele through his lawyer, demanding that I go to radio, TV stations and the Brekete family, including five national newspapers, and retract the statement I made against the Central Bank.

“The lawyer also asked me to pay N500 million in damages for alleged defamation of character; otherwise, I will be sued for defamation in a court of law.
“And for me, I have documents to back-up all my claims. The claims were not concocted, I have documents containing the presidential directives, and supporting evidence to show where the CBN erred.

In fact we still have some confidential documents that haven’t been released to the public yet,” he said.
Mr Kazaure, however, stressed that he would not be intimidated by the legal threats.

“I want to tell you that I will not be intimidated by all these threats. The truth is gradually revealing itself.
“You can see what happened at the Senate recently, with the investigation of 27 trillion loans to commercial banks and another N23 trillion loans created by the CBN for the federal government to borrow.

So the truth is coming out gradually, and those who doubted my initial claims can now see for themselves,” Mr Kazaure added.