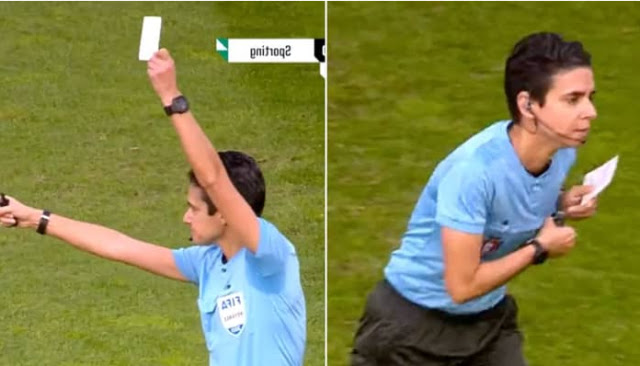 A referee who officiated a match in the Portuguese league is trending online after flashing a ‘white card’ during a fierce women’s derby between Sporting Lisbon and Benfica.

Since the 1970 FIFA World Cup, football fans have become familiar with referees flashing yellow card and red cards to offending players. However, this was the first time when a white card was used in the game.

With Benfica leading 3-0 during the first-half, the ‘white card’ was flashed when someone on the bench in the dugouts reportedly felt ill.

The referee brandished the white card to both medical teams who had rushed to the aid of the unwell fan in the stands in recognition of their ‘sportsmanship’. Benfica went on to win the game 5-0 and advance to the semi-finals.

The white card is designed to show recognition to clubs for acts of fair play during a match, in a bid to ‘improve ethical value in the sport’.

The white card has been introduced in Portugal alongside many FIFA initiatives of late.

Football’s international governing body has also introduced concussion substitutes to the game, as well as longer stoppage time, which was most notable during the group stage matches at the 2022 World Cup in Qatar.