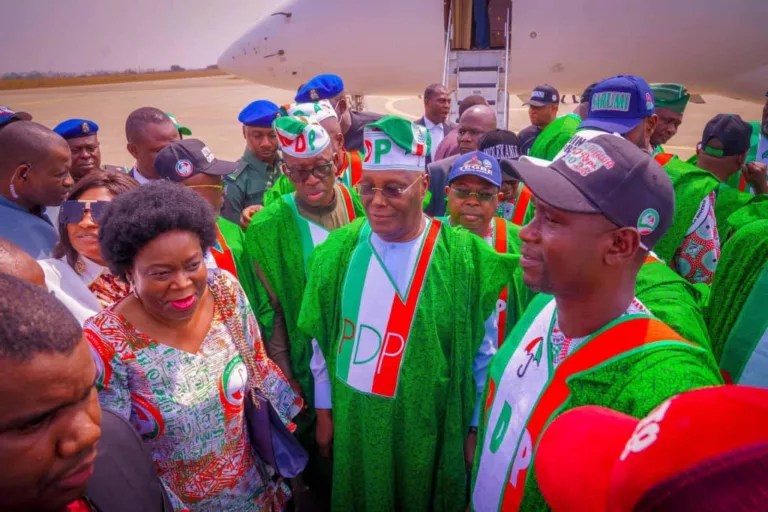 However, major PDP stakeholders in the state attended the rally with key supporters of the party’s presidential candidate, Atiku Abubakar, asking party members and supporters in the state to vote Governor Makinde for a second term in office.

The atmosphere at the Ibadan rally was indicative of the fact that Atiku and Makinde may have settled their rift behind the scene in order to forge a common front ahead of the upcoming general elections next month.

As the rally gets underway, those who spoke so far including the Master of the Ceremony, Senator Dino Melaye; director-general of the Atiku/Okowa Presidential Campaign Council and Sokoto State governor, Aminu Waziri Tambuwal, and wife of the presidential candidate, Amina Titi Atiku Abubakar, among others, said the political differences between Atiku and Makinde have been resolved, calling on all party members and supporters to re-elect Makinde as Oyo State governor in the March 11, 2023 elections.

Recall that Makinde is one of the aggrieved five governors of the PDP otherwise called G-5 or Integrity Group, who are at loggerheads with the party’s national leadership over the continued stay of Dr. Iyorchia Ayu as the national chairman of the PDP since the emergence of Atiku as the presidential candidate.

The G-5 has repeatedly called for Ayu’s removal for a Southerner to take over the affairs of the PDP, as a pre-condition for supporting Atiku’s presidential bid.

Oyo State is the first G-5 State where Atiku presidential campaign train has landed and the last South-West State to campaign.