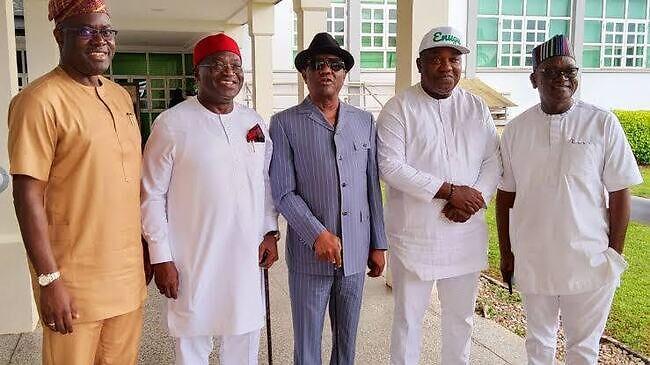 THE G5 governors of the Peoples Democratic Party (PDP) have abandoned their attempt to line up behind a single presidential candidate in the February presidential election.

Governors Nyesom Wike (Rivers), Sam Ortom (Benue), Okezie Ikpeazu (Abia) and Ifea- nyi Ugwuanyi (Enugu) arrived in Ibadan, the Oyo State capital on Wednesday, for the flag-off of the re-election campaign of the host governor, Seyi Makinde.
Before the rally, they scheduled a meeting for Wednesday’s night in order to consider the emerging reality conscious of the fact that members of the Integrity Group cannot possibly back one candidate because of local perculiar political demands.

Findings showed that whereas both Wike and Makinde are not leaning towards the candidate of the Labour Party (LP), Mr Peter Obi, both Okezie and Ikpeazu have resolved to keep their preferred candidates to their chest for the time being.
Ortom is stoutly in favour of the candidate of Obi, announcing on Tuesday that he supports his endorsement by former President Olusegun Obasanjo.

It was learnt that the G5 members went into Wednesday’s meeting to encourage each other to take a position that is consistent with his state’s political reality in order not to jeopardise their personal ambitions.
The source added that the Ibadan meeting should produce a common stand where the governors will now be allowed to stick to their preferences.

In the case of Ikpeazu and Uguanyi, who are yet to indicate their preferred candidates, it was gathered that the meeting will also encourage them to silently back their choice should it be other than the presidential flag bearer of the PDP, Atiku Abubakar.
The source said Wike and Makinde will be able to openly canvas support for their choice whenever they choose to come out with their position.

The governors are expected to continue to manage the situation since they would not want to create the perception of a crack within their ranks.
An insider explained: “They won’t allow the thing to show outwardly. I think that’s the way they will resolve it because local differences are at play.

“They will allow themselves to manage individual peculiarities of their areas. Even if Enugu wants to support Tinubu, he can’t openly say it. He has to do it tactically or else, it will affect him. The same thing with Abia. Benue can say whatever he wants to say. Oyo and Rivers will go all out.
“So, they will keep on managing the peculiar circumstances because they don’t want to be divided. They won’t want the division to spill over.”