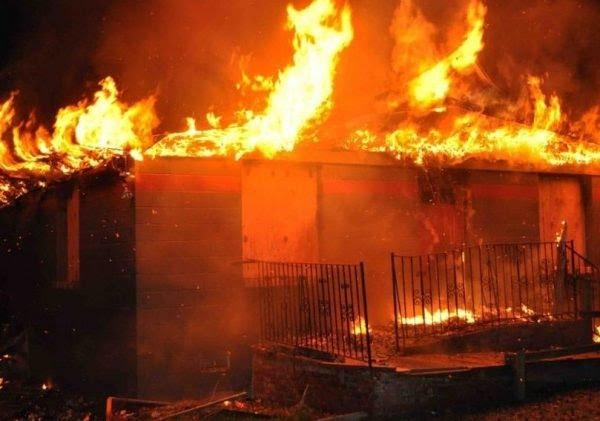 Fire razes warehouse, near the Ariaria International Market in Aba, on Tuesday.

It destroyed goods estimated at over 50 million.
The News Agency of Nigeria (NAN) reports that the warehouse is situated at No. 5 Market Crescent/Umuode Road, opposite Ekumi Plaza.
A NAN correspondent, who visited the scene, reports that virtually all the items in the warehouse, including kitchen utensils and other products, were completely burnt.

“It was then that we went into action to try to quench it.
“A good Samaritan later called the Fire Service, which came and helped to quench the fire,” Ajah said.
Hè regretted the huge damage done to the goods and building which, he said, would gulp millions of naira to repair.

The owner of the warehouse, Mr Nobertgreat Atulegwu, said he brought new stock into the place in December 2022.
Atulegwu said that he was leaving Aba for a burial in his hometown when he received a call that his warehouse was on fire.
“On getting here I found that everything had totally burned down.
“I am yet to ascertain where the fire came from.

“Unfortunately for me, it was only my warehouse that was burnt in the building and there was no electrical device or connection in that building.
“May God help us because this is our life savings that have gone down the drain.
“I pray that it will be a story I shall live to tell in future.

“I pray that God will touch good-spirited Nigerians and the government of Abia to come to help us recover from this huge loss,” he said, sobbing.
The Commander, Aba Command of the Abia Fire Service, Mr Belenta Belenta, confirmed the incident to NAN.
Belenta said that they received a distress call about the fire from the Chief Security Officer of Ariaria International Market, Mr Chimezie Smart.

He said that his men quickly responded and quenched the fire.
According to him, the huge smoke emanating from the fire affected their unprotected bodies.
Smart said that the fire “unknowingly spread into the warehouse from the landlord’s area”.

He said: “The fire originated from the activities of the landlord’s children somewhere close to the warehouse.
“People in the neighbourhood helped to put it out but did not know that it had spread into the warehouse.”