Ghana and Nigeria are rowing on similar waters, facing same realities and expectations. To many, the buildup to this top of the bill game is the perfect recipe for a grudge match.

Nigeria, currently ranked third on the continent will face a Ghanaian team still smarting from the heavy weight of its last AFCON disappointment.

Austin Eguavoen, former international and a member of the much-vaunted golden generation is being supported by another member of the ilk, Emmanuel Amuneke. Both coaches were appointed by popular demand and have huge expectations on their shoulders.

Nigeria will travel to Ghana for the first leg of the encounter before hosting their rivals a few days after for the final wrap of the World Cup qualifiers. 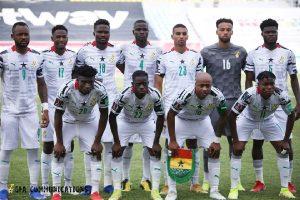 When Are The Games Coming Up?

Ghana will host Nigeria on Friday, 25th of March at 8:30 p.m Nigerian time before visiting the Super Eagles four days later on the 29th of March. The return leg in Nigeria will start 6 p.m local time.

Where Are The Games Coming Up?

Ghana will host Nigeria at the Cape Coast Sports Stadium in the country’s capital, Accra before travelling to face the Super Eagles at the Moshood Abiola National Stadium, Abuja, Nigeria’s Federal Capital Territory.

Which TV Station Will Be Showing The Game?

The games will be broadcast live on the official website of FIFA and on their YouTube channel.

Nigerian local stations, AIT and NTA are also tipped to broadcast the games while SuperSport is also in line to broadcast it.

The games can also be streamed on Livesport TV and on some yet to be revealed platforms.

Nigeria and Ghana’s rivalry dates back to 1950, with the Ghanaians having the edge overall.

The last time Nigeria faced Ghana in a competitive fixture was at the semifinal of the 2010 African Cup of Nations in Angola, where they lost to an Asamoah Gyan lone goal.

Both teams have faced 49 times in 72 years with Ghana winning 21 times against Nigeria’s 10. They have drawn 18 times.

The Super Eagles have not defeated Ghana in 15 years, and didn’t lose to the Black Stars for 12 years prior to 2007.

The last time both teams faced was 2011 with the international friendly game ending in a goalless draw.

Ghana are one of Africa’s best performers at the World Cup achieving a quarterfinal feat in 2010 at their second appearance at the mundial.