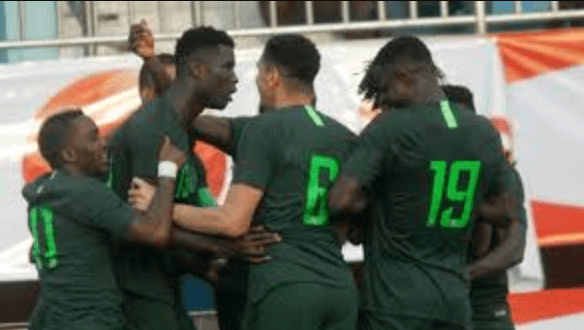 The Smurfs lost the Limburg derby to their city rivals on Sunday, and it has sparked an angry reaction from their Nigerian import

Super Eagles striker Paul Onuachu has lashed out at his Genk teammates after the Smurfs stumbled to a 1-0 home defeat to bitter city rivals Sint Truiden VV on Sunday.

Onuachu failed to add to his 16 league goals this term, as Genk delivered a lacklustre performance to fall to a solo Daichi Hayashi strike in the 29th minute.

The defeat was Genk’s first loss to the Canaries in six league matches, leaving manager Bernd Storck’s men at the risk of missing out on a Europa League playoff spot.

And Nigerian international Onuachu could not hide his displeasure afterwards, aiming a sharp rebuke at his teammates.

“Sorry, but now I really can’t defend the team,” the 27-year-old forward said, as per Voetbalprimeur.

“We didn’t show anything today; we didn’t play as a team. We played like sh*t, like scared chickens.”

The challenge does not get any easier for Onuachu and Genk as they next face possibly their most difficult assignment of the season. On March 20, the Smurfs will battle Club Brugge at the Jan Breydel Stadium, where the champions have not lost in 15 matches.