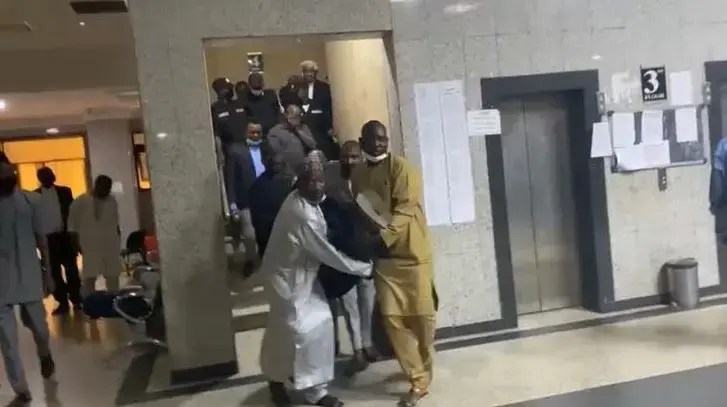 There was drama in court today as Ramatu Yakubu Kyari, the wife of the suspended Deputy Commissioner of Police (DCP) Abba Kyari, slumped shortly after a Federal High Court, Abuja, adjourned the bail application of her husband till March 28, 2022.

Justice Emeka Nwite fixed March 28 for ruling on the bail motion filed by Ramatu’s husband and others after their lawyers and the prosecution counsel argued their position for and against the request.

Justice Nwite, who adjourned the ruling, ordered Kyari and other police officers seeking for a bail to be remanded in the custody of the National Drug Law Enforcement Agency (NDLEA) pending the determination of the matter.

The middle aged woman, who wore a black Hijab, however, fell on the floor while armed operatives of the NDLEA were leading Kyari and others away from the court premises.

Though she appeared lifeless on the floor, she was quickly carried up and rushed inside one of the offices on the third floor of the court by some officials of the NDLEA and lawyers.

The development delayed the NDLEA officers from conveying the defendants to their office as they waited for Kyrai outside the court premises for about 45 minutes before he was led into the waiting vehicle.

The NDLEA had filed an eight-count charge against Kyari and others bordering on alleged drug trafficking.