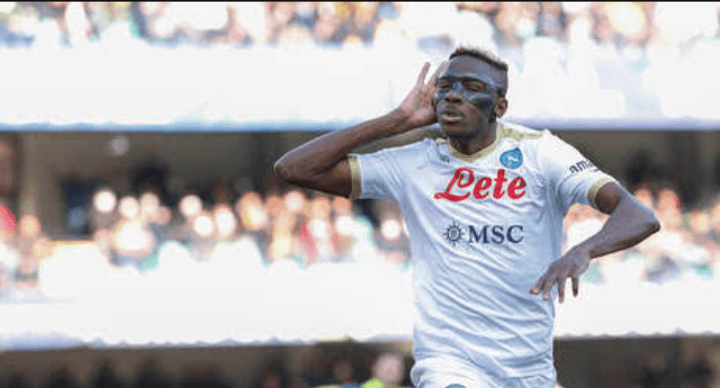 Victor Osimhen became a father for the first time after the Napoli striker yesterday celebrated the birth of his daughter.

The Super Eagles striker missed yesterday’s Napoli training following the birth of his daughter as he was allowed by the club management to be with his daughter.

Osimhen is in readiness for his return to action since he copped an injury on September 7 as the reason for the absence is of a family nature, as communicated by Napoli in the usual report from the Training Center.

“Of beautiful, beautiful news, the Nigerian center forward celebrated the birth of his first daughter. This does not cast doubt on his return to the squad for the match against Cremonese,” wrote La Repubblica.

Also, feelers from Napoli confirmed that Osimhen may be thrown into the fray when Napoli slug it out against Cremonese in this weekend’s Serie A.

According to Corriere del Mezzogiorno, the Nigerian striker will perhaps return to savour the pitch for a piece of the match just over a month after the injury against Liverpool.

Also, the Repubblica wrote: “The Nigerian striker trained smoothly during the international away match of his teammates and worked overtime on Wednesday alone in Castel Volturno. The number 9 hopes to return to the group and his forced exile is about to end, with Spalletti already welcoming him back from Holland.”

The paper added: “We need our bomber, even if Raspadori and Simeone are doing very well. The competition will be an added value. Osimhen hopes to make himself useful at least part-time in Cremona and then to take back a place in the sun in Naples. We also need him to extend the goal streak by seven.”