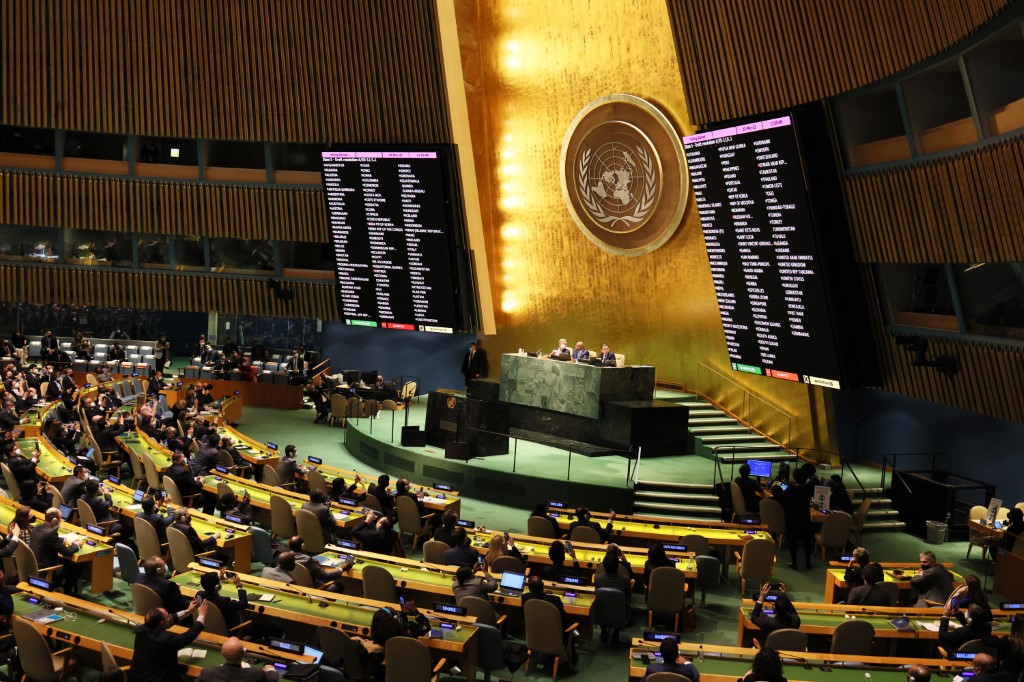 The United Nations General Assembly on Wednesday voted 141 to five, with 35 abstentions, to demand Russia halt its invasion of Ukraine. The vote came after the 193-member assembly convened its first emergency session in a quarter century.

Also, Russian Foreign Minister, Sergey Lavrov, said another World War would be “nuclear and destructive” for all parties and condemned Western sanctions on what he termed Kremlin’s unprovoked war in Ukraine.

However, United States Vice President, Kamala Harris reiterated that US troops would not fight Russians in Ukraine as the Kremlin continues its advance.

Ukrainian President Volodymyr Zelenskyy, in a televised address to the nation one week into the hostilities, rallied his people and praised them for their resolve.

The Ukrainian government has raised $270 million in war bonds after it began issuing the assets to fund its defense of the country from Russian invasion.

Ukraine’s central bank enacted capital controls amid the Russian invasion, making it difficult for foreign investors to participate in the program. That hasn’t stopped many international and local investors from buying the bonds, according to Ukraine’s finance ministry.

“The proceeds from the bonds will be used to meet the needs of the Armed Forces of Ukraine and to ensure the uninterrupted provision of the state’s financial needs under the war,”

The Ukrainian government continues to lobby for stricter sanctions on Russian financial institutions and businesses. Western sanctions on Russia have so far caused the ruble to plummet in value while everyday Russians and economic elites rush to shield their wealth from financial crisis.

Food, medicine and other supplies were being distributed at central locations and by trucks rolling through the city of 1.5 million residents, the mayor said. Efforts were underway to provide heat to lost utilities in the bombing as temperatures dip toward freezing.

“Kharkiv is holding on and will hold on,” Terekhov said on Ukrainian TV. “Today the main goal of our enemy is to sow panic and devastation, but Kharkiv will always stand.”

“Let’s hope this happens,” Peskov said. “Ours will be there and ready.”

Talks held Monday near the Belarus-Ukraine border produced no breakthrough, though the two sides agreed to meet again. It was not clear when talks would continue.

Zelenskyy had accused the Kremlin of trying to force him into concessions by intensifying the invasion.

“Fair negotiations can occur when one side does not hit the other side with rocket artillery at the very moment of negotiations,” he said.

Appearing on NBC News, Harris also said it would be “irresponsible” to engage in nuclear escalation after Russian President Vladimir Putin said he had put the country’s nuclear arsenal on alert.

“Our position is we are not going to contribute to an escalation in that direction and we have no intention of changing our posture,” Harris told NBC News.

Harris made the rounds yesterday across several network morning shows.

“We are not going to put US troops in Ukraine to fight Russians on the ground or in the air, but we are firm in our preparedness to defend our allies,” she said, echoing President Joe Biden’s vow to defend “every inch of NATO territory.”

Ukraine is not a member of NATO, but the US has sent troops to reinforce NATO’s eastern flank.