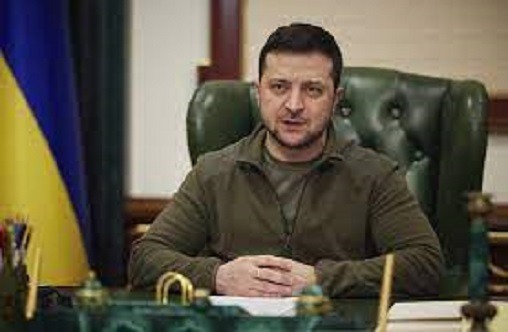 Ukrainian President Volodymyr Zelensky said authorities had managed to evacuate around 100,000 from several cities in the past two days, but warned the threat of Russian forces deploying chemical weapons is ‘very real’ as the invasion enters its third week.

In last night’s televised address to the nation, Zelensky sarcastically addressed Russian troops and asked where they planned to deploy chemical weapons.

‘Where will you strike with chemical weapons?’ he asked. ‘At the maternity hospital in Mariupol? At the church in Kharkiv? Okhmadit children’s hospital? Or at our laboratories, which have been around since Soviet times and work on regular technology, not military technology?’

The embattled president also announced civilians were evacuated from the cities of Sumy, Trostyanets, Krasnopillya, Irpin, Bucha, Hostomel and Izyum despite constant shelling, but Deputy Prime Minister Iryna Vereshchuk said not a single civilian was able to leave Mariupol on Thursday as Russian forces failed to respect yet another temporary ceasefire.

The constant bombardment of the southern port city, which has been without water and electricity for close to a fortnight due to Russia’s refusal to respect ceasefires, was described by Zelensky as ‘outright terror, from experienced terrorists’.

‘The invaders launched a tank attack exactly where this ‘corridor of life’ was supposed to be. They have a clear order to hold the city of Mariupol hostage, to torture it,’ he said.