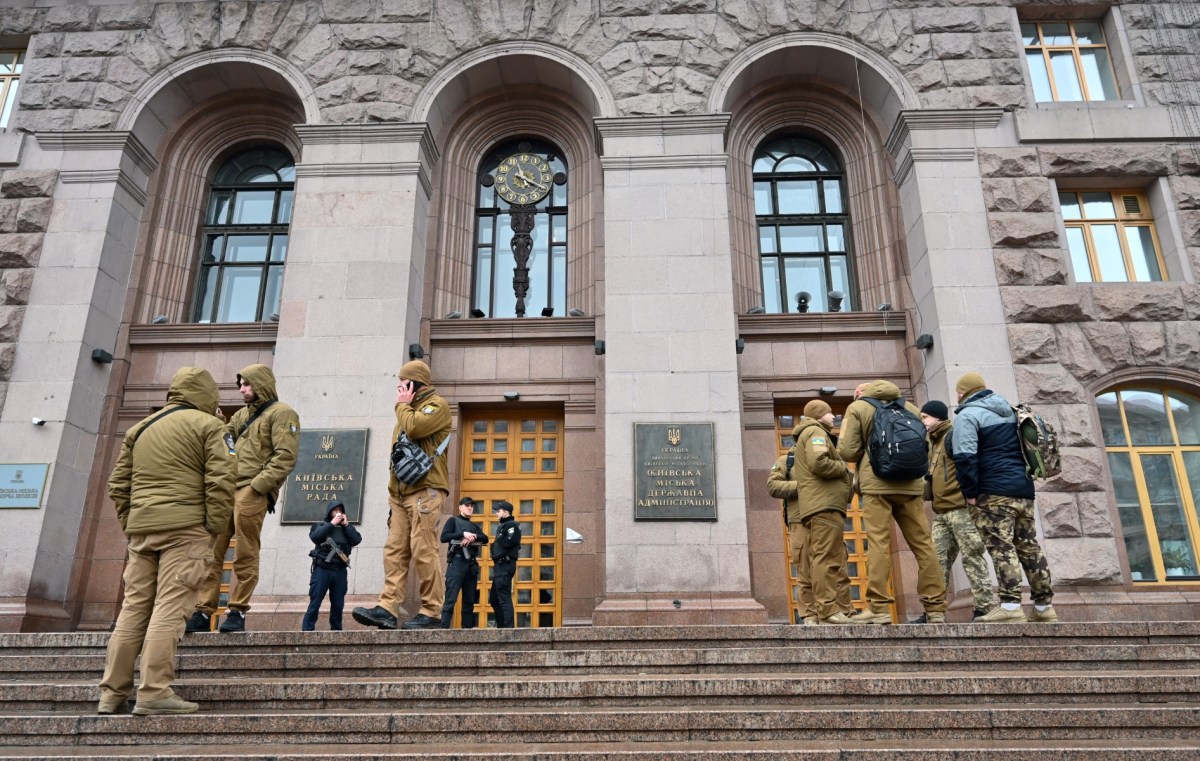 Outgunned but determined Ukrainian troops slowed Russia’s advance and held onto the capital and other key cities — at least for now. In the face of stiff resistance and devastating sanctions, President Vladimir Putin ordered Russia’s nuclear forces put on high alert, threatening to elevate the war to a terrifying new level.

Explosions and gunfire that have disrupted life since the invasion began last week appeared to subside around Kyiv overnight, as Ukrainian and Russian delegations prepared to meet Monday on Ukraine’s border with Belarus. It’s unclear what, if anything, those talks would yield.

Terrified Ukrainian families huddled in shelters, basements or corridors, waiting to find out. Exact death tolls are unclear, but Ukraine’s president says at least 16 children have been killed and another 45 wounded, among hundreds, perhaps thousands, of other casualties. Millions have fled homes or the country all together.

Russia’s Central Bank scrambled to shore up the tanking ruble Monday and the U.S. and European countries upped weapons shipments to Ukraine. While they hope to curb Putin’s aggression after he unleashed Europe’s biggest conflict since World War II, the measures also risked pushing an increasingly cornered Putin closer to the edge.

“I sit and pray for these negotiations to end successfully, so that they reach an agreement to end the slaughter, and so there is no more war,” said Alexandra Mikhailova, weeping as she clutched her cat in a makeshift shelter in the strategic southeastern Ukrainian city of Mariupol. Around her, parents sought to console children and keep them warm.

The relative lull in warfare Monday morning in Ukraine was unlikely to last.

Neighboring Belarus could send troops to help Russia as soon as Monday, according to a senior American intelligence official with direct knowledge of current U.S. intelligence assessments. The official spoke on condition of anonymity because he was not authorized to speak publicly.

U.S. officials say they believe the invasion has been more difficult, and slower, than the Kremlin envisioned, though that could change as Moscow adapts. The British Defense Ministry said Monday that the bulk of Putin’s forces are about 30 kilometers (20 miles) north of Kyiv, their advance having been slowed by Ukrainian forces.

Western nations ramped up the pressure with a freeze on Russia’s hard currency reserves, threatening to bring Russia’s economy to its knees. Russians withdrew savings and sought to shed rubles for dollars and euros, while Russian businesses scrambled to protect their finances.

In addition to sanctions, the U.S. and Germany announced they will send Stinger missiles to Ukraine among other military supplies. The European Union — founded to ensure peace on the continent after World War II — is supplying lethal aid for the first time, including fighter jets.

EU defense ministers were to meet Monday to discuss how to get the pledged weaponry into Ukraine. Germany’s defense minister said without elaborating that her country has “channels and possibilities” to do that, and a trainload of Czech equipment arrived Sunday. Blocking off those shipments will clearly be a key Russian priority.

It remains to be seen how much the weaponry will help Ukraine fend off Russia’s vastly greater arsenal.

The increasingly erratic Putin made a clear link between ever-tightening sanctions and his decision Sunday to raise Russia’s nuclear posture. He also pointed at “aggressive statements” by NATO as a reason for his move, a reference to his long-running stance that the U.S.-led alliance is an existential threat to Russia.

U.S. and British officials played down Putin’s nuclear threat, and its practical meaning was not immediately clear. Russia and the United States typically have land- and submarine-based nuclear forces that are prepared for combat at all times, but nuclear-capable bombers and other aircraft are not.

A tiny sliver of hope emerged as a Ukrainian delegation arrived on the border with Belarus for talks with Russian officials Monday. Ukrainian President Volodymyr Zelenskyy’s office said it would demand an immediate cease-fire.

While Ukraine sent its defense minister and other top officials, the Russian delegation is led by Putin’s adviser on culture — an unlikely envoy for ending the war and a sign of how Moscow views the talks. It wasn’t immediately clear what Putin is seeking in the talks or from the war itself.

Western officials believe Putin wants to overthrow Ukraine’s government and replace it with a regime of his own, reviving Moscow’s Cold War-era influence. His comments Sunday raised fears that the invasion of Ukraine could lead to nuclear war, whether by design or mistake.

With the Ukrainian capital besieged, the Russian military offered to allow residents to leave Kyiv via a safe corridor, raising fears a further onslaught is coming. The mayor of the city of nearly 3 million had earlier expressed doubt that civilians could be evacuated. Authorities have been handing out weapons to anyone willing to defend the city. Ukraine is also releasing prisoners with military experience who want to fight, and training people to make firebombs.

Battles also broke out in Ukraine’s second-largest city, Kharkiv, and strategic ports in the country’s south came under assault from Russian forces. Mariupol, a strategic port city on the Sea of Azov, is “hanging on,” said Zelenskyy adviser Oleksiy Arestovich.

The Russian military claimed Monday it had taken full control of Ukraine’s airspace after showering its air bases and air defense batteries with air and missile strikes. But a similar claim on the first day of the invasion turned out to be untrue, and U.S. officials said Sunday that Moscow has failed to fully control Ukrainian skies.

In Mariupol, where Ukrainians were trying to fend off attack, a medical team at a city hospital desperately tried to revive a 6-year-old girl in unicorn pajamas who was mortally wounded in Russian shelling.

During the rescue attempt, a doctor in blue medical scrubs, pumping oxygen into the girl, looked directly into the Associated Press video camera capturing the scene.

“Show this to Putin,” he said angrily. “The eyes of this child, and crying doctors.”

Their resuscitation efforts failed, and the girl lay dead on a gurney, covered by her blood-splattered jacket.

Nearly 900 kilometers (560 miles) away, Faina Bystritska was under threat in the city of Chernihiv.