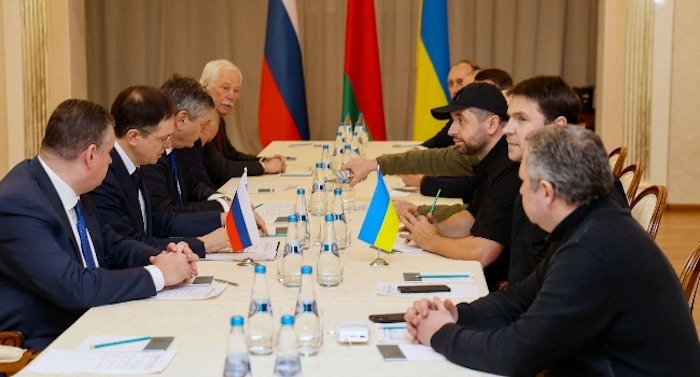 A Ukrainian negotiator said on Thursday that a second round of ceasefire talks with Russia had not yielded the results Kyiv hoped for, but the sides had reached an understanding on creating humanitarian corridors to evacuate civilians.

“That is, not everywhere, but only in those places where the humanitarian corridors themselves will be located, it will be possible to cease fire for the duration of the evacuation,” he said.

They had also reached an understanding on the delivery of medicines and food to the places where the fiercest fighting was taking place.

It was the first time the two sides had agreed any form of progress on any issue since Russia invaded Ukraine a week ago.

Podolyak said the outcome had fallen short of Kyiv’s hopes, however.

“To our great regret, we did not get the results we were counting on,” he said, without elaborating.

“The only thing I can say is that we discussed the humanitarian aspect in sufficient detail, because quite a lot of cities are now surrounded. There is a dramatic situation with medicines, food, and evacuation,” Podolyak said.

Earlier, the talks between the Russian and Ukrainian delegations began at an undisclosed location on Ukraine’s border.

Apart from the humanitarian corridors, Ukraine had also demanded an immediate ceasefire and armistice.

Meanwhile, Russian President Putin said the Russian military has offered safe corridors to civilians to allow them to leave areas of fighting in Ukraine.

Putin, speaking in a video call with members of his Security Council, has charged that Ukrainian nationalist groups are preventing civilians from leaving.