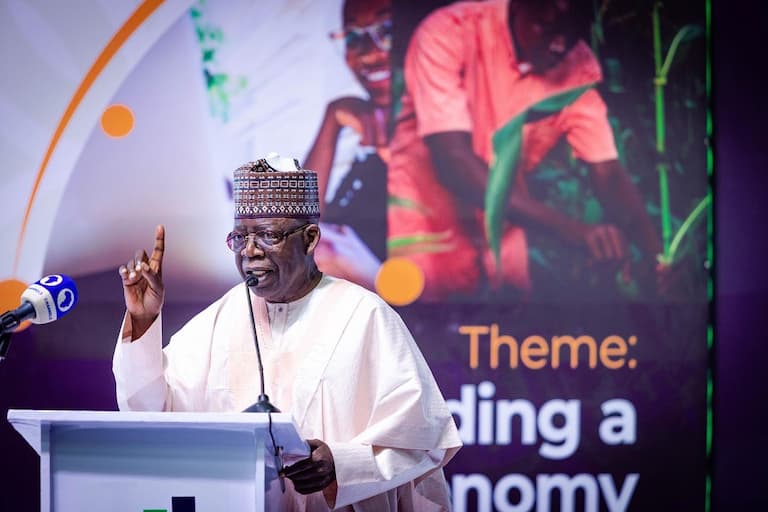 The presidential candidate of the All Progressives Congress (APC), Bola Tinubu, has promised to consolidate the investments of President Muhammadu Buhari’s administration in all sectors of the country to build on the successes recorded if elected as president in 2023.

Tinubu said he would lead a renewed push to move Nigeria from “the status of a nation of potential into a country of actual accomplishments as an economic dynamo.”

He stated that his administration would, just like he did upon assumption as Lagos State Governor, bring out workable policies to ensure that insecurity is nipped in the bud in the North and across the country.

The APC presidential standard-bearer made the vow while speaking during his interaction with the Arewa Joint Committee at Arewa House in Kaduna on Monday.

The two-term former governor of Lagos State stated that the whole country is endowed with resources that can be harnessed for greater economic development, noting that he would focus on tackling underinvestment and effective management.

Tinubu, who praised past leaders of the country including Nigeria’s late Premier of the Northern region, Ahmadu Bello; Nigeria’s Prime Minister, Tafawa Balewa; Obafemi Awolowo; and Nnamdi Azikiwe for being visionary leaders who gave their all to nation-building, said he would continue to give to ensure the country remains indivisible, achieving greatness together as one if elected as president in 2023.

He said: “Our economic plan would utilise the vast natural resources we have, through strategic investment in infrastructure which will lead to the diversification of the economy and wealth creation across the entire country.  We will pay attention to modern economic drivers such as the digital economy, creative industries, sports and entertainment sectors for the benefit of our young people.

“The APC Federal Government has taken several measures to build infrastructure and improve the ease of doing business across the country.  This has been complemented by the efforts of some of our states to attract investments in diverse sectors of the economy.

“Under my leadership, the Nigerian government will be business-friendly. We shall support private businesses in our country and attract foreign direct investment to create jobs, re-industrialise our country and accelerate economic development.

“Nigerian businesses in sectors like banking and cement have successfully ventured out of the country to build thriving subsidiaries. We will build a strong domestic economy, expand the capacity of our domestic market to support growth, and encourage export capacity in the areas of our competitive advantage. We have the endowments to be a prosperous country. I will lead a renewed push to move us from the status of a nation of potential into a country of actual accomplishments as an economic dynamo.”

Tinubu further promised to focus on using his experience of building human capital, which he said made Lagos one of the largest economies in Africa, to grow the nation’s economy to an enviable height.

“Using my experience of building human capital, industries, and institutions, which has led to Lagos being one of the largest economies on the continent, I will reposition our existing industries and make them a competitive source of industrialisation and growth not just for the North but the entire country.

“It is time to fetch water from a dry well, and I, Bola Ahmed Tinubu, have done it before and I will do it. We will find a way where there are no roads!” the former said.

Tinubu added that the North has a greater advantage in agriculture, saying his administration will ensure that the region emerges as the hub of agribusiness in Africa through huge investment in the sector in collaboration with the private sector.

On his plans for education and helping reduce the out-of-school children in the North, the APC presidential flag-bearer said: “Education is the most effective weapon against poverty. Comparative with other countries, education in Nigeria suffers from funding deficit on account of our population and limited resources.

“I will provide the required leadership and mobilise investment for the development of the sector. We will work with both state and local governments to reform and retool the system. These reforms will give special attention to the welfare and training of our teachers and lecturers as necessary catalyst for the better system we desire.

“We will work with stakeholders to evolve creative solutions to the funding needs of our higher education that will bring terminal end to challenges of funding and the attendant perennial industrial actions.

“To ease financing for basic education and expand access, we will cut down on the counterpart fund required by states to access UBEC grants to an affordable percentage.

“Millions of our children are currently roaming the streets instead of being in classrooms. My administration will invest heavily in infrastructure to allow for proper integration of these children into our conventional schools.

The event was attended by leaders from political parties, academics, civil society, and youth organisations in the North.

Tinubu was accompanied by the APC Governors from the North, including the Kaduna State Governor, Nasir El-Rufai; the Director General of the Tinubu-Shettima Presidential Campaign Council and Plateau State Governor, Solomon Lalong; former APC National Chairman, Adams Oshiomhole; among others.