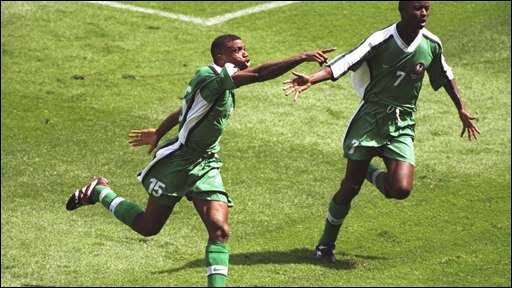 Sunday Oliseh was a staple for fans of the Super Eagles in 1990s and 2000s. Elegant, lanky and brilliant, he captained the Nigerian national team and is a member of the squad now known as its golden generation.

His forays into European football, where he played for some of the biggest teams in that part of the world, began on a day almost thirty two years ago.

July 1st 1990, 16-year old Oliseh arrived in Belgium to bring his beautiful talent to the attention of European football fans. Oliseh had flown to Brussels via Zurich on the request and support of a Belgian agent, Claude Bissot.

He was invited to have a trial with Belgian club, RFC Liege, now in Belgium’s third division.

The former Borussia Dortmund would later recall that all he had on the day was $50, an Adidas sports bag, a pair of football boots, and the holy Bible, described as his most-prized asset.

Oliseh was welcomed by Mr. Bissot’s family, and took care of him like their own. He was brushed up on the French language and was given a book that helped his speaking.

“Football has brought me here, I think God knows what’s best for me,” a smiling and clearly ecstatic Oliseh said on his first day in Belgium.

He quickly settled with Mr. Bissot’s family and became their children and pets’ playmate.

Oliseh was introduced to a player who would later become his teammate in the Super Eagles, Victor Ikpeba. The former Monaco star was at the time already on the books of RFC Liege.

Ikpeba, the 1997 African Player of the Year winner was available to help Oliseh settle better in the team as he had his trials. They’d both later be joined at the club by former Super Eagles goalkeeper, Alloy Agu.

The great former Super Eagles midfielder was signed up by RFC Liege after his first day of trial with the club President revealing he didn’t know he was very good.

Oliseh who played for Ajax Amsterdam and Juventus in his career went on to have a great football career in Europe. He played at two World Cups for Nigeria and was part of the first Super Eagles team to play at the World Cup.

He also helped Nigeria win its second African Cup of Nations at Tunisia 94 and was a prominent member of the Dream Team I squad that won the Olympics’ football gold medal in 1996. Oliseh’s goal against Spain at the France 98 World Cup is one of th Super Eagles’ finest goals in a major tournament.

The former Julius Berger midfielder had a successful career and is still remembered as one of Nigeria’s best midfield players ever. He coached the Super Eagles between 2015 and 2016 and has worked in different managerial jobs across Europe.