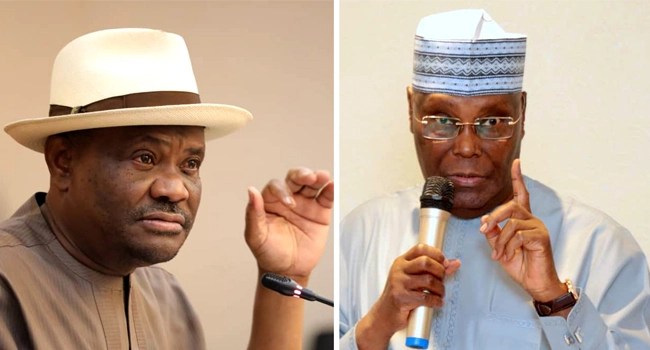 The collapse of the reconciliation moves was sealed with the appointment of Governor Aminu Tambuwal as the Director General of the PDP Presidential Campaign Council.

It is also clear that only Oyo State chapter of the PDP remains committed to the agitation for the resignation of Dr. Iyorchia Ayu as national chairman of the party following categorical statements by party officials in Lagos, Ekiti, Ogun, Ondo and Oyo states that they are for Atiku and Ayu.
Although Atiku picked Wike and some of the governor’s allies as members of the presidential campaign council, the Wike camp yesterday decided to draw the battle line by opting not to play any key role in the party’s campaign.

The parties are allowed, under the regulations issued by the Independent National Electoral Commission (INEC), to commence their campaigns on Wednesday, September 28.
It was learnt that Wike’s camp has started weighing its options on its next line of action.
As a first step, it is seeking to stop Oyo State Governor Seyi Makinde from accepting to be part of the Atiku campaign to enable him face his reelection bid.

One source said that on his part, Atiku is yet to give up on winning over Wike.
The PDP flag bearer, it was gathered, sent ex-Ekiti State Governor Ayo Fayose to Wike and his team recently to “forgive and forget” whatever might have caused their feud.

Fayose was reportedly rebuffed by some loyalists and strategists of Wike.
The alleged penetration of Fayose was seen by Atiku’s group as a breakthrough to break Wike’s camp.
A Northern governor, who has been with Wike all along, is now believed to have perfected plans to shift to Atiku’s group soon.

Investigation also revealed that Wike, who visited Abuja on Friday, had a session with some of his backers.
It was agreed that Atiku was yet to meet the minimum conditions for reconciliation with Wike.

A top source in Wike’s camp said: “The appointment of Tambuwal (another Northerner) as the campaign DG has sent a message that Atiku doesn’t want inclusion in the party.
The PDP candidate wants to go it alone. He is saying that our camp is insignificant. The poll outcome will determine his assumption.

“We feel that Atiku has drawn the battle line but we will wait for the leaders of the group to decide. We are weighing many options. We wish him well.
Responding to a question, the source added: “Atiku made another desperate effort in the week when he sent Fayose to speak with Wike’s camp.
“He gave Fayose the mandate in Ibadan but we smelt a rat. We rebuffed Fayose’s overtures because Atiku was trying to break Wike’s ranks.

“We know we have two characters in our camp. One governor is the weakest link and another member is unstable. We will overcome any obstacle to prove to Atiku that we are not children.”
As at press time, it was gathered that Wike’s camp was seeking to prevail on Governor Makinde to steer clear of the PDP PCC because of his re-election bid.

Another source added: “Makinde’s choice was designed to pacify Wike’s camp, but it is a booby trap because it will distract him from his second term campaign.

“Also, in the history of election in Nigeria, first term governors or political office holders usually appointed as Campaign DG often lose second term ticket.
“We have advised Makinde to reject the offer and concentrate on winning the election for his second term. It is left to him to accept or reject the advice.”

Why North-East can’t turn its back on me – Tinubu