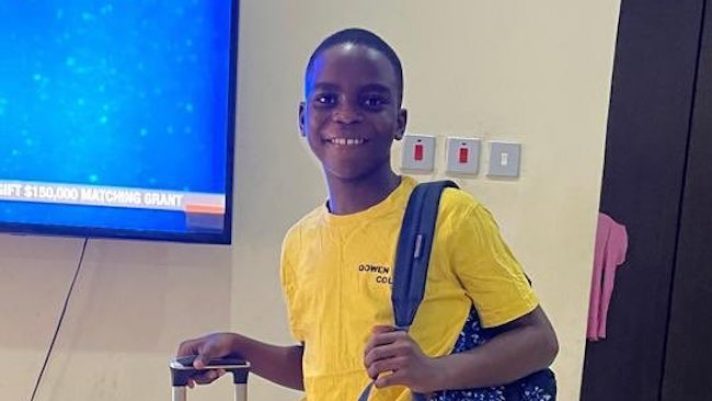 Sylvester Oromoni Jnr, the late Dowen College Student who was alleged by his family to have suffered injuries as a result of bullying by five senior students of the college was not treated at a hospital.

Sylvester Oromoni Snr, the father of late Oromoni Jnr made the revelation on Monday before an Ikeja Coroner’s Inquest while being cross-examined by the counsel to one of the accused students, Godwin Omoaka (SAN).

The witness told the inquest that his son was treated at home in Warri, Delta, after the Oromoni family doctor, Dr Aghogho Owhojede, said there was no private ward available in his hospital.

He gave a timeline of events from when Oromoni Jnr was brought home from school by his guardian, Clifford Tejere, on Nov. 23, 2021 from school.

He said Mr Tejere did not notice any sign of beating on the body of the deceased and that no swollen spot was noticed on the ankle of the late student, where it was alleged by the school that he had sustained a football injury.

The witness noted that a full body x-ray was not conducted by the family when he came home from school.

“There was an x-ray conducted on the part the school wanted us to do, which was the legs down. He was taken to a diagnostic centre,” Mr Oromoni Snr said.

The father of the deceased revealed that his son was not taken to the hospital on Nov. 24, 2021 by the family and that he arrived Lagos from Delta at 6.00 p.m. on Nov. 25, 2021 after he was alerted by his family that his son was in a critical state.

He revealed that after he arrived Lagos, he took his son back to Dowen College, arriving at the school at 7. 00 p.m. to pack his belongings.

He said on Nov. 26, 2021, he left for Warri, Delta, with his son and arrived in the evening and that Oromoni Jnr was not taken to the hospital on that day.

“On Nov. 29, he was taken to St Louis Laboratory for a scan. We were referred by the doctor to go there.

“I was not there on that day because I had rushed to my house in Asaba, Delta to pick up something and I came back the next morning, which is Nov. 30, 2021.

The witness further revealed that after Oromoni Jnr was confirmed dead, the family wanted to bury him immediately.

“From the clinic, they were taking him for burial. I called them and they brought him back in the Hilux that they were using to convey him and they parked in front of my gate.

“The police came and took pictures and videos of the body and after that they asked me to take him to the mortuary and not bury him,” he said.

Following the revelation of the witness, Mr Omoaka requested that a series of interviews Oromoni Snr had granted to the press (Arise TV, the Punch Newspapers and BBC Pidgin) be played at the inquest.

In the various footage, the witness was alleging that his son was dragged, severely beaten, his stomach stumped upon by some senior students of the school.

Responding to more questions, Mr Oromoni Snr revealed that he had never been to his son’s hostel at Dowen College.

He, however, accepted that other students would have heard his son cry out if he was being beaten by alleged bullies.

The Coroner, Mikhail Kadiri, adjourned proceedings until Feb. 15 for continuation of the cross-examination.

NAN reports that it was alleged that the 12-year-old Oromoni died on Nov. 30, 2021 from injuries sustained in an attack by five senior students of Dowen College for allegedly refusing to join a cult.

It was also alleged that he was forced to drink an obnoxious substance by his attackers.

The Lagos State Director of Public Prosecution Advice released on Jan. 4 disputed the allegation stating that two autopsies revealed the cause of Oromoni’s death as acute bacterial pneumonia due to severe sepsis.