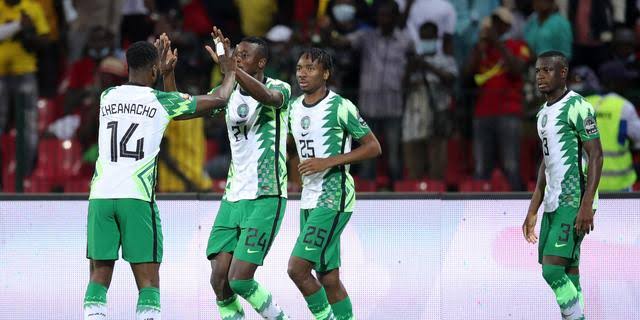 Umar, who divided opinions amongst fans at the 2021 AFCON in Cameroon showed his capabilities in flashes, especially when he came on against Tunisia. He was however a subject of criticism for his performance in the first two games against Egypt and Sudan and was called unprintable names by some fans.

The former Partizan Belgrade and AS Roma attacker, on a hot scoring streak at his La Liga Smart Bank club, Almeria, with thirteen goals and seven assists in 25 games this season, said it’s unfortunate that fans of the Super Eagles go on a tribal war.

Nigerian sports journalist, Oma Akatugba quoted Umar to have said that “people say I am in the national team because I am from the north, I laugh because if I truly wanted to use my connections, I would have been in the national team long ago. I scored 4 goals at the Olympics in Brazil. That’s not connection. I worked.

“I am sad that Nigerians have turned the national team to tribal war. People support players based on their tribe. It beaks my heart. Even you guys the media have caused a lot of problems. When you like a player you praise him over the others. It’s not good.

“This is why I do not like anything media. I allowed you come around me because I see you thrive to be different. Nigerians also believe those playing for bigger clubs must play ahead of others but it’s not about club but what you bring to the team,”

In Umar’s defense, Super Eagles midfielder, John Ogu also added that he has faced something similar in the past with Nigerian former club teammate, Anthony Nwakaeme.

On this particular topic,if I talk Wetin my eyes see on the matter for National team, una Go pity me . Wetin me and Nwakaeme eyes and ear hear for the matter . God no dey sleep

He said fans crucify players who don’t play in top leagues and label them average.

“On this particular topic,if I talk Wetin my eyes see on the matter for National team, una Go pity me . Wetin me and Nwakaeme eyes and ear hear for the matter. God no dey sleep.

“Once you don’t play in top league or a solid side, some set of fans or media will label you Average and will never see anything good you do,” Ogu wrote.

Nigeria vs Ghana in World Cup Qualifier – Who Will Progress?