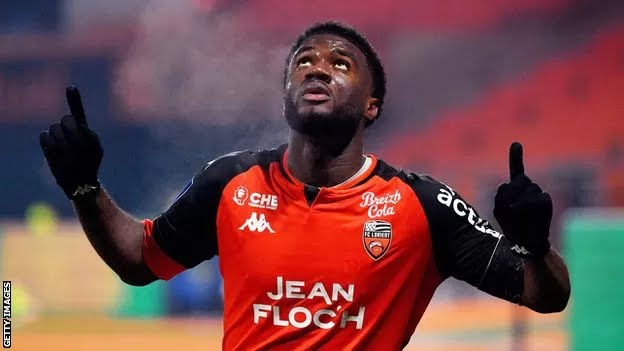 Lorient can fly out of the relegation zone with an away win at the weekend, but the availability of Les Merlus’ Nigerian import for the tie is still in doubt

Moffi has been sick since the beginning of the week after going down with the flu. The former Kortrijk star netted Lorient’s only goal as they fell to a crushing 4-1 defeat to Lyon last weekend.

That strike was Moffi’s fourth league goal of the season for struggling Lorient, a tally well below his incredible 14-goal haul in his debut campaign.

Still, the 22-year-old remains one of Lorient’s biggest stars, making him vital to the club’s survival hopes.

Christophe Pelissier’s men are stuck in 18th on 24 points and are battling to avoid the relegation playoff.

A victory over Clermont at the Stade Gabriel Montpied, Clermont-Ferrand, could lift Lorient to within one point of 15th-place Clermont and out of troubled waters, if other results go their way.

Despite his poor returns in front of goal, Moffi is still Lorient’s leading goalscorer and his presence could swing the game in his side’s favour.

However, the Super Eagles striker, according to Ouest-France, has not joined team training this week, with his club boss still unsure if he can count on a match-fit Moffi.