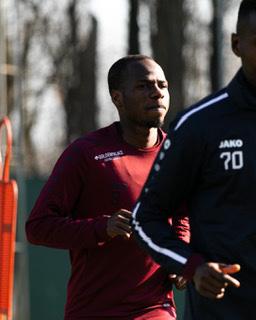 Super Eagles hopeful and Royal Antwerp midfielder, Alhassan Yusuf was on the scoresheet against Anderlecht in a closely-contested tie in the Belgian Jupiler League.

Yusuf, who moved to Antwerp from Sweden’s Goteborg in the summer has been a revelation for Antwerp this season, playing in the middle of the park alongside former Roma and Inter Milan midfielder, Radja Naingollan.

The 21-year-old Kano-born midfielder was on the pitch for 76 minutes in the contest but had scored what was Antwerp’s leveller in the 42nd minute.

Nigeria-eligible striker, Joshua Orobosa Zirkzee had given Anderlecht the lead in the 24th minute before Yusuf scored the equaliser three minutes before the break. It was his third goal of the season.

Israeli international, Lior Refaelov scored Anderlecht’s second from the spot in the 59th minute and the team held off for a win to go two points ahead of Antwerp who sit in fourth place.

Yusuf had 94% pass completion in the game as 29 of his attempted 31 passes were successful.

Yusuf also won 3 of his 4 ground duels in the game. He lost possession three times in the game, committed two fouls and received a yellow card. He got a match rating of 7.2, to be the joint-second best performer for Antwerp in the game.

The former FC Hearts midfielder is yet to get a Super Eagles call up but with such impressive showings, one may be in the way in the distant future.