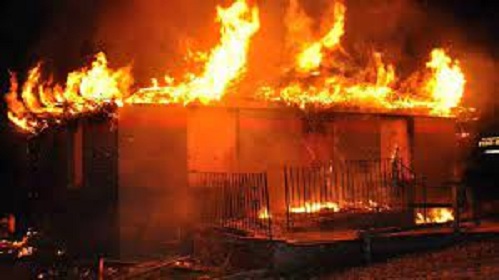 Students at the Benjee Hostel, a private facility in the Usmanu Danfodiyo University, Sokoto, flee for their dear life as fire engulfed their rooms.

The hostel is located near the Faculty of Agriculture and the school’s clinic.

PUNCH Metro learnt that many of the students had gone to a mosque for the Jummat prayer on Friday, December 2, when the incident happened.

The fire was reported to have been caused by an electrical fault.

A source stated that one of the students was cooking beans with an electric cooker when he left for the prayer.

A spark reportedly ignited the fire, which was fuelled by the gas cylinders in the hostel at the time of the incident.

Students who attempted to save their property were said to have been injured, while those returning from the prayer watched as their belongings went up in flames.

Our correspondent gathered that when the fire service got to the scene, it was difficult to put out the fire, as the 500-room hostel had only one entrance.

The fire was said to have raged for over three hours, while firemen struggled with their movements.

Some of the victims, who spoke to PUNCH Metro, said life had been hard since the incident, adding that it affected their studies.

The Students’ Union Caretaker Committee Chairman, Shamsudeen Umar, said the university had commenced investigations to unravel the cause of the fire, saying “the excessive use of gas cylinders in cooking is overwhelming and worrisome.”

“The owner of the hostel has been informed and repairs have commenced. We are also collaborating with the school management with respect to destroyed documents so as to provide replacements,” he added.