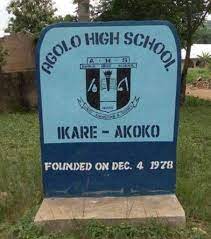 It was learnt that event had started peacefully on Thursday as students competed in various sports only for it to end in tragedy.

Eyewitnesses said the event was well attended as secondary school students from various parts of Akokoland attended the annual fiesta with many old students also in attendance.

An eyewitness, who pleaded anonymity, said, “Suddenly gunshots were heard which led to the death of a student while two others were seriously wounded.”

The injured were said to have been rushed to an undisclosed hospital where they are now receiving medical attention.

“After the sad incident, there was panic in Ikare Akoko as parents ran helter-skelter looking for their children,” another source added.

Meanwhile, the Divisional Police Officer in Ikare Akoko, SP Olatujoye Akinwande, confirmed the incident, saying the corpse of the student had been deposited in a mortuary while those who sustained injuries were receiving treatment.

He also said that normalcy had returned to the area.