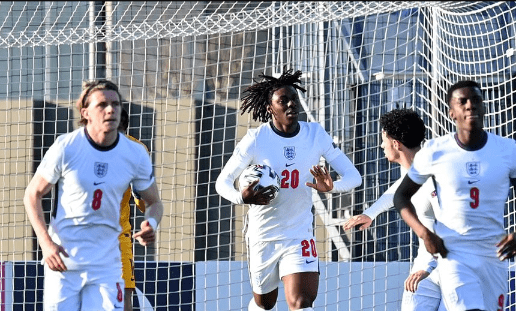 Eze has been one of the principal targets of the Nigerian Football Federation, with NFF President Amaju Pinnick a known admirer of the talented playmaker.

Born in London to Nigerian parents, Eze already featured for the England youth teams, even captaining the U-20 Lions in a game against Chile at the 2019 Toulon tournament.

Nigeria’s hopes of convincing Eze to switch allegiance took a significant hit in May 2021 after the 23-year-old was named as part of Gareth Southgate’s 33-man provisional squad for Euro 2020.

Eze, however, suffered an injury during a training session on the same day.

Eze’s smooth transition from the Championship to the English Premier League has been impressive, with the former QPR lad notching four goals and six assists in his first season at Crystal Palace. He has only made six league appearances this term.

His talent remains undeniable, though, and he has shown enough for former Super Eagles coach Siasia to see him as the possible long-term successor to the legendary Austin Okocha.

And the Rio Olympics bronze medal-winning coach reveals he has had a chat with Eguavoen on inviting Eze to address the Eagles’ creative deficiency.

“Well, we don’t just have a number 10, that is a creative midfielder in the mode of Jay-Jay Okocha that can distribute accurate passes to the strikers,” Siasia told The Sun about the Super Eagles’ non-functioning midfield.

“We don’t just have them now and that is why I have been thinking of Chidera Eze with Crystal Palace. The Super Eagles need that player. He could be the next Okocha if we invite him.

“I have told Eguavoen that the team needs a player of his mood. He will be a good addition to the Super Eagles. We need somebody like him in the team because if you don’t have an offensive player who creates chances for the strikers to score, the team will have problems.”

The Super Eagles disappointingly exited the 2021 Africa Cup of Nations at the first knockout round after excelling at the group stage.

Inspired by the dribbling heroics of Nantes ace Moses Simon, Nigeria scored six goals in their first three matches. But when it mattered most against Tunisia, the team could not turn around a goal deficit, struggling to create many meaningful chances while missing the few that came their way.

Siasia opines that the lack of goal is not the fault of strikers Taiwo Awoniyi and Umar Sadiq. The 1994 Afcon winner insists the result would have been different if a top-quality playmaker had been in the team.

Siasia said, “That is why we had the problem we faced during the Nations Cup in Cameroon.

“Strikers like Awoniyi will run around without getting the ball and we will say he did not play anything, yet nobody gave him the ball.

“When Sadiq came in, even though he missed many chances, he, however, created some chances too.

“Awoniyi is a good player, scoring very well, but we have to understand the network between the midfielders and attackers.

“If the strikers don’t get the balls, they have to create the chances by themselves.”

Without Eze, the Super Eagles will need to navigate their way past eternal rivals Ghana in the final playoff round of the 2022 FIFA World Cup qualifiers in March.

Serie A: Osimhen helps Napoli to a dramatic victory against Lazio