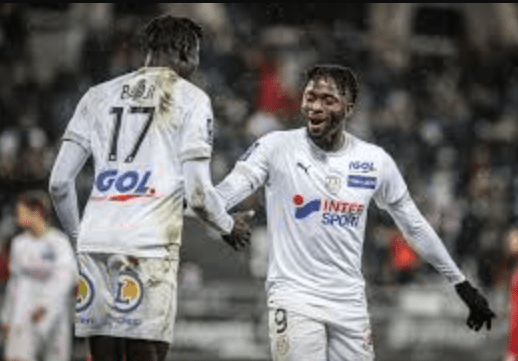 Arokodare is enjoying a new lease of life after a tough start to the campaign in the French Ligue 2.

The 21-year-old arrived in Amiens on loan from Latvian side Valmiera in July 2021, following an unsuccessful loan spell at FC Cologne in the Bundesliga.

And after Arokodare managed just one goal in his first six matches for Amiens, it seemed he was in for another rough time in France.

But the Nigerian striker has shaken off his slow start to record seven goals and an assist in 23 league matches, adding five more in only five appearances in the French Cup.

1.97m-tall Arokodare has blossomed more when playing alongside Badji (1.89m) upfront for Amiens, with the duo’s height and physicality causing defenders loads of problems.

Only Badji, with 11 goals, has scored more league goals than Arokodare for the Unicorns. Both men were on target at the weekend (Arokodare with a brace) as Philippe Hinschberger’s side blew Nimes away 3-0 at the Stade de la Licorne.

And Badji, on-loan from African giants Al Ahly, says he is having more fun playing alongside the Nigerian powerhouse.

“We (Tolu and I) get on very well! We try to complement each other, not to do the same thing at the same time on the pitch,” Badji told the official website of the French Ligue 2.

“He can pick up and I can stay in contact with the defenders or vice versa. With our size and strength, we can hurt. We will see how many goals we will have scored at the end of the season.

“It’s an advantage to play with two big players in front: it makes our task easier and above all complicates that of the defenders when it comes to marking.”

Arokodare and Badji will look to pad their stats this weekend when Amiens go away to Pau FC to honour their game week 27 league clash.