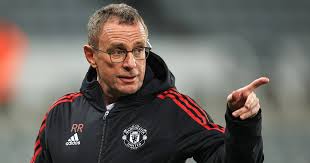 Rangnick will take on a consultancy role at the end of the season.

The likes of Luis Enrique, Mauricio Pochetinno and Erik Ten Hag have been linked with the job.

According to the Independent, the German coach has made the signing of two midfielders and a striker his prority.

He is reportedly keen on a defensive midfielder , with various players already linked to the club.

Declan Rice,Boubacar Kamara and Aurelien Tchouameni are the aforementioned players.

He is also looking at bringing a striker to Old Trafford, as Edinson Cavani is most likely to leave at the end of the season when his contract expires.

Cristiano Ronaldo is also expected to leave the club if they fail to secure a top four spot.