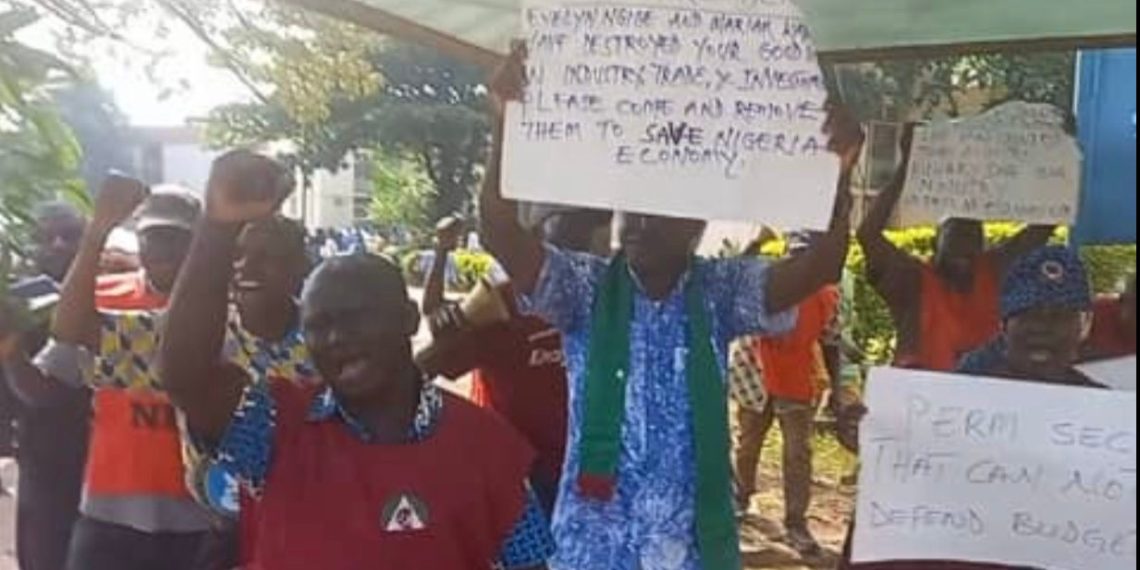 Staff members of the Federal Ministry of Industry Trade and Investment on Wednesday shut off the ministry’s entrance during a protest to demand the removal of the permanent secretary in the office.

The permanent secretary, Evelyn Ngige, is the wife of the Minister of Labour and Productivity, Chris Ngige.

The protesters accused Mrs Ngige of not managing staff of the ministry well and not paying attention to their welfare. They said some workers were owed salaries for months.

Mrs Ngige did not respond to PREMIUM TIMES’ calls and a message on Wednesday.

The protest began at 9:30 a.m. with the staff putting the entrance of the building under lock and key.

The chairman of the Joint Negotiating Council of Trade Union at the ministry, Okonkwo Onwuyai, told PREMIUM TIMES the permanent secretary did not provide funding for the running of the ministry despite release by the government.

Mr Onwiyai said the union had called on the Minister for State, Trade and Investment, Miriam Katagum, and the Head of Service, Folasade Yemi-Esan, to intervene but no action was taken.

“We want her to go because of bad governance, incompetence and poor management,” Mr Onwuyai said.

“Everything that has to do with career growth has been destroyed, she doesn’t take advice from anyone, no working tools. The infrastructure is decaying, the surroundings are bushy and unkempt. Instead of solving the problems of the owed staff, she added to the problem. Looking at the environment, investors will be discouraged from visiting the ministry.

“She denied staff the annual training by the ministry, she could not even defend the 2022 budget and was also reluctant to treat files.

“Dr Fola Shade Esan, did not help matters, we went officially to her, all in a bid to use the internal mechanism we are facing but she treated us with levity up to date. We are asking Mr. President to bring the head of service to order because if she had acted timely, even the minister of state, nothing happened.”

Another member of staff, Mary Okwunze, said, “She did not act like a mother”. She said Ms Ngige failed to coordinate the affairs of the ministry properly.

The union called on President Muhammadu Buhari to remove Ms. Ngige from the ministry.

Ms. Ngige became a permanent secretary in December 2019, along with eight others. She was redeployed from the office of the Head of Civil Service to the Ministry of Industry Trade and Investment.