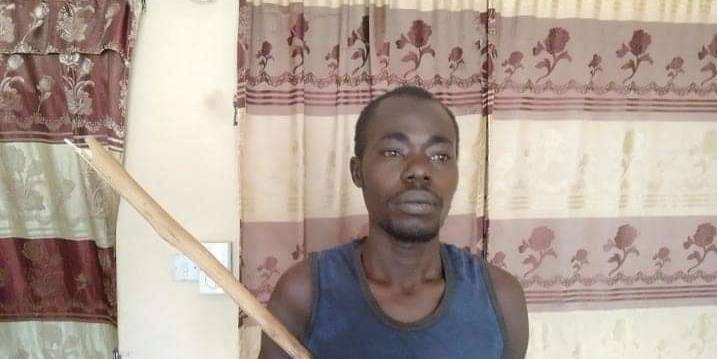 A 31-year-old man identified as Nicodemus Ignatius has been arrested by the police in Adamawa State for allegedly beating his 75-year-old father to death.

Nicodemus, who hails from Unguwan Bistel in Song town, Song Local Government Area, carried out the act on March 3, 2022, shortly after returning from a drinking joint.

Punch Metro gathered that Nicodemus had sometimes in November last year threatened to kill the father, resulting in his arrest by the police. But the father, out of sympathy, sued for the release of his son from police custody.

A neighbour, who spoke to Punch   correspondent said, “Nicodemus had returned home from the joint where he usually drinks at about 8:00 pm on that fateful day and met his late father and mother in the room and decided to lock both of them up.

“But the 75-year-old Ignatius, sensing danger and afraid of the possibility of his son setting the house on fire, jumped out through the window to escape. He was unaware that his son had since armed himself with a stick.

“The suspect, who was wielding the stick, pounced on his father and hit him with the stick, breaking his head and resulting in his untimely death.”

The suspect, who was reported to the police after the crime, confessed to killing the father under the influence of marijuana.
Nicodemus, who could not give any coherent explanation for the murder of his father, said, ” I smoked Indian hemp on that fateful day and bitterly regret my action.”

He said the accused will soon be charged to court upon completion of the investigation, and cautioned the general public to desist from taking laws into their own hands.