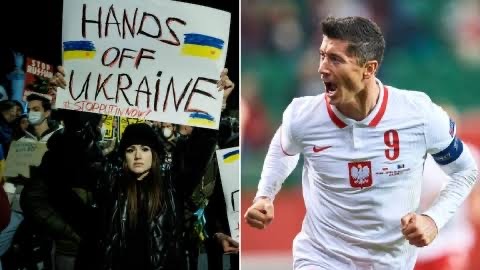 Kulesza made the announcement on Saturday following Russia’s invasion of Ukraine.

Poland was to take on Russia in Moscow on Thursday March 24 in the World Cup play-off tie.

The winner between Poland and Russia will entertain either Sweden or Czech Republic on March 27 for a place at this year’s World Cup in Qatar.

And following Russia’s invasion in Ukraine, Kulesza, Kulesza stated that Poland will not play the game.

“No more words, time to act! Due to the escalation of the aggression of the Russian Federation towards Ukraine the Polish national team does not intend to play the play-off match against Russia.

“We are in talks with (Swedish) and (Czech) federations to bring forward a joint statement to FIFA.”

Reacting to the announcement by Kulesza, Poland and Bayern Munich striker said:”It is the right decision!

“I can’t imagine playing a match with the Russian National Team in a situation when armed aggression in Ukraine continues,” Lewandowski tweeted. “Russian footballers and fans are not responsible for this, but we can’t pretend that nothing is happening.”

Also, players of the Polish national team made their position known in a statement released, following the announcement made by the country’s FA boss.

“We, the players of the Polish national team, together with the Polish Football Association, decided that as a result of Russia’s aggression against Ukraine, we do not intend to play in the play-off match against Russia.

“It is not an easy decision, but there are more important things in life than football. Our thoughts are with the Ukrainian nation and our friend from the national team, Tomasz Kedziora, who is still in Kiev with his family.”

The post Poland Refuses To Play Russia In 2022 World Cup Play-Off After Invasion Of Ukraine appeared first on Complete Sports.