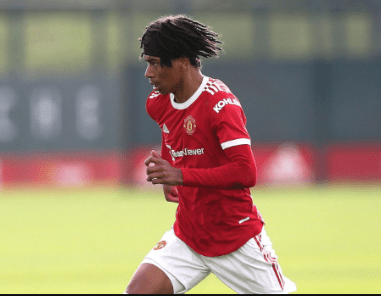 Poland are looking to beat Nigeria and England to the international allegiance of Manchester United youngster Maximillian Oyedele.

Sport.pl reports that the Polish Football Association named the teenager in Poland’s under-18 side for the upcoming international fixtures.

Born in Manchester to a Nigerian father and a Polish mother, Oyedele can represent any of these three countries in international football.

But this is the first time any country would invite the young defender, while it is not yet known if he will honour the invitation.

A versatile defender who can operate in defence or midfield, Oyedele has caught the eye over the past year for Manchester United’s under-18s.

The 17-year-old impressed in various roles during Manchester United’s run to the FA Youth Cup final.

A slick defensive midfielder, Oyedele has featured significantly in the U-18 Premier League, made an appearance in the UEFA Youth League, and has already debuted with United’s U-23s in the Premier League 2.

Even if he features for Portugal’s cadet team, Oyedele will remain eligible to play for the Super Eagles in the future.