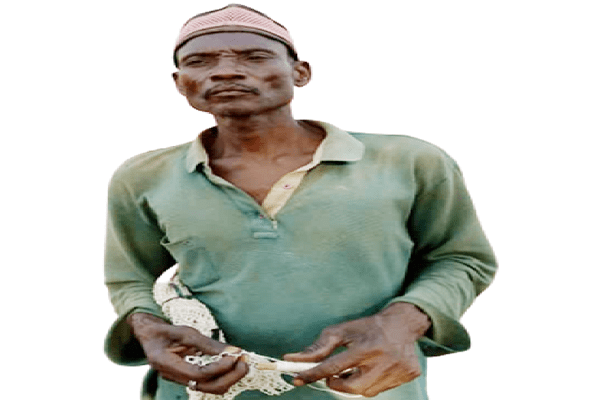 The Gidan Angalu community in Toto Local Government Area, Nasarawa State was thrown into shock penultimate Tuesday with the ‘resurrection’ of a native doctor at the point of burial two days after he was certified dead.

Fifty-nine-year-old Godwin Ugeelu Amadu had been confirmed dead by doctors at a private hospital at about 6 am on September 5, 2022, following which he was covered up and wheeled into the mortuary as doctors and family members awaited the arrival of his Abuja-based eldest son, Mr. Jacob Amadu.
Since the deceased native doctor was said to have left an instruction with his children that he must be buried not later than three days in the hospital before burial and he must not be embalmed with Formaline, arrangements were said to have been made for his burial two days later.

To the utter shock of Amadu’s children, relatives and sympathisers, however, the native doctor rose from the casket he was kept in as arrangements were being made to take his corpse to the graveyard, causing the crowd that had gathered for his burial to run in different directions.
The ‘resurrection’ of Amadu two days after his ‘death’ turned him into an overnight celebrity as people came from far and near to confirm what had happened.

Sharing his experience in an interview with our correspondent, Amadu, who said he has abandoned his career as a native doctor to become an evangelist, recalled that before his sickness and eventual ‘death’ on September 5, he had enjoyed good health and fully attended to patients who came from far distances to his village.
But sometime in July, he began to feel pains in his chest and legs. He said his legs were swollen and he tried treating himself as a native doctor but there appeared to be no improvement, prompting his two eldest children based in Abuja and one of his daughters based in Lafia to rush him to the Federal Medical Centre in Keffi.

At the hospital in Keffi, he was admitted for two weeks after which he was discharged and certified fit. But a week after he returned home, he developed severe chest pain.
He told his children who had gone back to their stations not to take him to the hospital again and also told them repeatedly not to keep his corpse longer than two or three days before burial.
With his condition getting worse, however, his children defied his instruction and returned him to a private hospital in a nearby community where he could get preliminary attention before he would be transferred to the Federal Medical Centre in Keffi where he had been treated before. There, doctors battled to save his life before they thought he had given up the ghost and prepared him for burial.

Also speaking with our correspondent, the eldest son, Jacob, who said his father was declared dead while he was travelling from Abuja to see him on his sick bed in Nasarawa State, said: “I got to the hospital at about 10 am on September 5 and the mortician at the hospital wheeled out the trolley containing my father and unveiled his face for me to see, and it was indeed my father.”
“We advised the hospital not to embalm him because he actually told us repeatedly not to embalm him when he dies and to bury him immediately rather than keep his corpse inside a room.
So we hurriedly left for the village to mobilise young men to help dig his grave so that we could bury him the second or third day as he had wished.

“On September 7, we brought his corpse to the village in a casket to bury him and sympathisers around the community were crying while others assembled in different locations discussing the sad event of his passing.
“While his body had been displayed in an open roof where he normally attended to his patients as a native doctor, the children brought the casket and put his body inside, preparatory for his burial, but he suddenly doctor rose from the casket.

We were in the village when we suddenly saw the casket shaking and eventually fell and my father woke up to the surprised of many people in the village. A lot of the men and women who had gathered ran away, believing that it was his ghost.
“I summoned courage as a man to walk up to him and got a seat for him to sit on. He was not talking.
“I later held his hand and led him to the bathroom. He had a bath and after a few hours, he requested for food. He ate and then relaxed. “In the evening of the next day, he started talking a little and on the third day, he tried to narrate his experience.”

In an interview with our correspondent one week after he ‘resurrected’, Amadu said he could not fully recollect all that transpired during his struggles in the throes of death except that he was writhing in pains at one moment, felt relieved moments later and found himself in another world.
Amadu said: “I thank God that he has given me life again after tasting death. It is a miracle that God gave me a second chance and I think I will dedicate the days he has given me to live again to worship him and preach his gospel.
“My journey to heaven was a tranquil one. I feel very confused about what God has done to me. All I can remember for now is that I lost my memory when I was sick, but people later gathered in my village to mourn my passing.

The cloud opened up and I saw something like a giant golden satellite suspended in space. I wouldn’t know whether this is what the bible calls heaven, but there I was greeted by a 75ft tall angel who stood in front of the gate.
“The angel had a beautiful sword and wore something like golden hair. As I looked round, I discovered that there were two other angels behind him holding pamphlets and books containing the words of God.
“The three angels had a brief discussion among themselves and later allowed me into the city of heaven.

“On entering the city, I met a childhood friend who died 22 years ago. His name was Choko Aguma. He was the one who took me round the city where everybody was committed to worshipping God.
I was told that Christ woke me up because if I was taken to the grave in the casket covered with sand, it would be very difficult for me to come back because I would lack the strength to pull out of the graveyard.
“I woke up and I felt cold. I came out of the casket gently and people who came to console my wife and children started running instead of coming to rescue me.”

Amadu added: “I thank God because I know He heard the prayers of my children who had wished that I stay up to 86 years to see them become influential and responsible members of the society, where the entire community look up to them. Thank God Almighty, their faith has brought me back to life.”
He described the land of death as peaceful, quiet and tranquil.
The place is filled with myriads of angels who are very tall, and there is light everywhere. There is no darkness as the angels were talking about Jesus Christ all the time, from morning throughout.
“It is about what the bible says about Jesus Christ and everyone there is committed to the bible and its teachings by the angels, and this notion convinced me to change completely and return to Christ as my personal saviour.

“I am no more a native doctor and I believe Jesus Christ is the way. He can heal and wake up the dead. “While in the cool city of heaven, I saw alot of my childhood friends, age mates and some of the girls I ‘toasted’ while growing up who died so many years ago.
“Some could not recognise me because I had become very old. They are all there enjoying life to the fullest.
I saw Juliana, Abawa, who were my girlfriends. They now share gospel words in the city. I also saw Abunagu, Tongee Thomas, Ishaya Again who were my aged grades. They were very happy to see me join them in the cool city.

“They asked after so many people who I know had died but were not in the city, probably they are on the other side. “I look for my father and mother but didn’t see either of them; maybe they are also on the other side.
“There, food is served free and in large quantity. Heaven is indeed an interesting place and I wish I never came back to the world.
“But now that I am back in the world I will dedicate the rest of my life on earth to the service of God.”

Recalling the experience, his wife, Mrs Salomi Amadu, said she was shocked that her husband came back to life after two days.
She said: “Initially, I was scared of going close to him. That made my eldest son to spend some time with us in the village to make sure that we are not afraid. “But gradually, we are recovering from the shock to relate with him
“What is most encouraging is that he prays all through since he resurrected. He is a complete man of God, though I have not started sleeping with him in the same house and he has not requested for it.

“But it is okay. We thank God that he is back, this time as a man of God. That is what I can say for now.”
Amadu’s younger brother, Philip Amadu, said it was actually a mystery to everyone in the village. “In fact, some people don’t believe it till now, but we are here monitoring him alongside his eldest son to see what further miracle God will do.
“This is a man who was dead. This kind of miracle is strange to us, but I can’t say anything more for now.”
His eldest son, Jacob, also said he would not comment on the matter until further developments occur.

He said: “Personally, I don’t even want the public and the world to know about this development because a lot of people will read different meanings to it.
It will draw attention to this small community, so I wouldn’t want to talk much about it.
“Even me, I am scared. I saw my dad’s dead body at the hospital. I personally bought his casket and saw them take him into the casket. His coming back to life at the peak of his burial arrangements shocked me completely. I am speechless.”