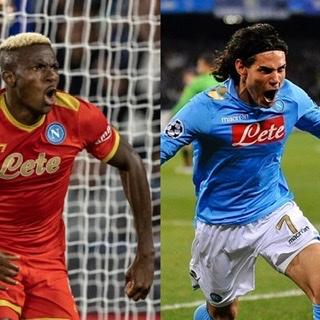 Victor Osimhen is a fans’ favourite at the Diego Armando Maradona Stadium, Napoli as his goals and presence are vital to the Partenopei’s quest for the title.

Former Chievo and Italy striker, Sergio Pellisier has advised Victor Osimhen to save some energy if he wants to score more goals. He said Osimhen can’t run as much as he does and score as he’s not modeled to be like Manchester United attacker, Edinson Cavani.

Cavani, like Osimhen was also a fans’ favourite at Napoli during his time in the Serie A.

Pellisier said on Radio Goal via Kiss Kiss Napoli that Osimhen can’t waste energy and get spent at the time of arrival in the box if he wants to increase his goals tally.

The attacker who had one cap with the Italian national team and scored more than 100 times for Chievo said while Osimhen is a good player, he’s not like Cavani who runs all game and still scores.

“What is happening to the Napoli attack? Unfortunately, the results arrive if the attackers score goals. Napoli had problems with players, someone has been apart for a few games, it’s not easy when you’re not full or 100%, you miss those who were scoring a lot of goals until recently.

“Where does Osimhen need to improve? An attacker must always score goals must waste as little energy as possible. There are few of Cavani, who continue to run throughout the game and even score goals. I like Osimhen, but he must not waste energy, he must have more opportunities in peace without arriving tired from having chased the ball all the time “ he said.

Italian manager, Gianluca Aztori had likened Osimhen to Cavani in October and said his hunger was like the Manchester United star’s.

Cavani scored 53 league goals in 69 Serie A appearances for Napoli.