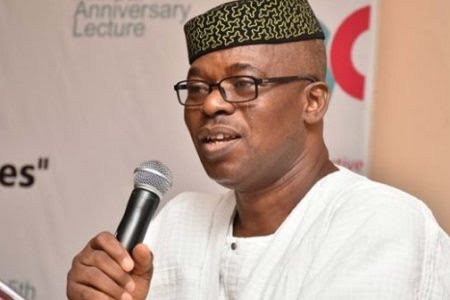 A former Ekiti State governor, Chief Segun Oni, has formally defected from the Peoples Democratic Party, where he contested for the party’s governorship ticket for the June 18 election in the state.

A former Commissioner for Information, Lanre Ogunsuyi, who was the Director of Media in the Segun Oni Campaign Organisation, said, “We have just said bye-bye to the PDP and ‘oga’ (Segun Oni) thanked all the people that worked with him and dissolved all the structures that ran the purported primary in PDP.”

Oni was defeated by Bisi Kolawole, who is now PDP candidate, in the party’s governorship primary which held in Ado Ekiti on January 26.

Although Ogunsuyi did not disclose the party which Oni was defecting to, insinuations are rife that Oni had concluded arrangement to fly the flag of All Progressives Grand Alliance for the governorship election.

The former campaign spokesperson said, “What we have now is a confluence of people called Segun Oni Movement. By next (this) week, we should have sorted ourselves out and know where we (party) we are going in line with the Independent National Electoral Commission timetable. What is certain is that we have left the PDP, but we are not certain about where we are going”.

Another Oni’s supporter and a former Ekiti PDP Publicity Secretary, Jackson Adebayo, said, “We will unveil the name of our new party by Tuesday.

“The people of Ekiti have decided that they want Segun Oni on any platform. And he hearkened to their calls.”

But the Ekiti PDP Publicity Secretary, Raphael Adeyanju, said PDP had no regret if the former governor had truly left the party, saying, “We will win the election without him”.

Adeyanju said, “If actually he (Oni) has left the party, I would call that good development for the PDP because with his presence, he has been a liability. When he left, those who left with him never returned with him.

“He returned to this party recently. That means he came to pick the party ticket. We have no regret, let him go. If he had not returned, we would have had our candidate and won the election. Without him, we will win on June 18. We wish him the best of luck.”