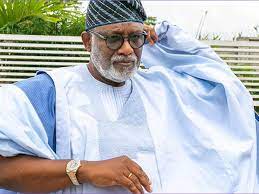 A yet-to-be-identified worker in the Ondo State Civil Service has been suspended for allegedly circulating reports that the state Governor, Rotimi Akeredolu, died.

The state Head of Service, Mr John Adeyemo, disclosed the suspension of the worker while speaking in Akure, the state capital.

The death rumour circulated a few days ago while Akeredolu was out of the country.

But the wife of the governor, Betty, refuted it on her Facebook page.

Adeyemi, who did not disclose the identity of the worker, explained that he (worker) posted the fake news on his Facebook account.

“Incidentally, I called Mr Governor a day before the rumour and we spoke and chatted. So, when I heard the fake news, I was disturbed and I was like who is this fellow carrying this terrible rumour because I knew Mr Governor was alive and with vigour. So, I never believed it,” he added.

According to the head of service, the worker’s name had been forwarded to the state civil service commission for appropriate punishment.

He said the sanction was meted out to the officer to serve as a deterrent to others.

Adeyemo expressed delight that the governor was back to the country hale and hearty, saying God had shamed the rumour mongers and their sponsors.