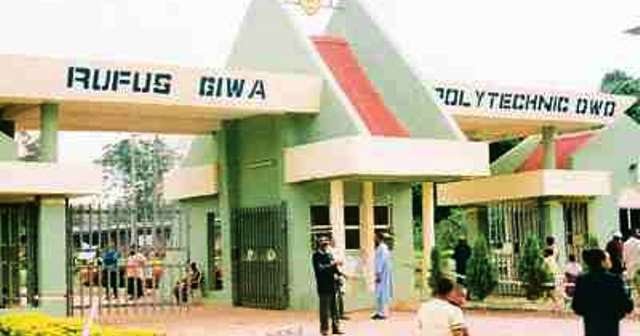 Following the suspension of the activities of the Senior Staff Association of Nigeria Polytechnics (SSANIP) and the Non-Academic Staff Union (NASU) of the Rufus Giwa Polytechnic, Owo, the workers of the institution on Wednesday, commenced an indefinite strike over alleged unpaid salary arrears of 13 months.

The workers of the state government-owned Polytechnic, embarked on an indefinite strike after the workers union demanded the immediate payment of their salaries and arrears after threatening to down tools.

The workers, armed with placards of various inscriptions such as “Pay our 13-months salary”; “Akeredolu, come to our aide”; “Ogundahunsi must go”, Our members are suffering and dying amongst others, blocked the main entrance of the school, vowing not to resume to the office until their demands are met by the government.

The Chairman of the Senior Staff Association of Nigeria Polytechnics of the institution, Mr Chris Olowolade said the workers had to embark on industrial action following the insensitivity of the management of the institution and the state government

Olowolade explained that all the workers’ unions had written to the institution’s management and the state government on their plight with no positive response.

“The management’s proscription of ASUP, SANNIP, and NASU is illegal. They are owing us 13 months. They didn’t pay these salaries and they are not making any effort to pay the salary.

“Because of that, we resumed the suspected strike yesterday, immediately we sent our communique to them, they issue a letter that unions on campus have been suspended. This is nonsensical. We are not owned under the regulations of the institution.

“Government use to give us subventions which are to be added to our IGR by the management of the institution, but over three years, they said the IGR is dwindling but up till today, they don’t have the solution to make sure that the IGR is increased”

Olowolade said the situation has gone out of control which necessitated the protest and industrial action, saying the management decided to demote staff without doing anything while some of their allies were promoted.

He alleged the management that “They also recruit their families through the backdoor, no advertisement, no interview. This is another illegality. Their actions were challenged in court. There is a judgement to that effect, but they didn’t obey the court judgement.

“All these things attest to the inefficiency of the management and that of the council. We are calling for their removal with immediate effect”

Also, speaking, the Chairman of the Non-Academic Staff Union of the institution, Mr Adebayo Obayoriade said the union has used every means at its disposal to resolve the crisis, but the management had failed to respond positively.

While reacting, the Rector of the institution, Mr Gani Ogundahunsi assured that the current face-off between the workers and the institution’s management would soon be resolved.

He said the state-owned polytechnic had a history of a backlog of salaries before the present administration came on board with a series of interventions that have brought peace and unequaled development to the school.

Ogundahunsi who lamented the economic constraints in the country as responsible for the financial situation of the institution appealed to the workers to show more understanding as the state government has begun the process of paying them.

Ogundahunsi said the recent subvention was used for the payment of two and half months’ salaries promising that more efforts would be deployed to ease the situation.

It will be recalled that the institution had a few years ago suspended the Academic Staff Union of Polytechnics (ASUP) for demanding improved staff welfare.

Advertisement
Related Topics:ASUPNASUSSANIP
Up Next