A two time governorship candidate in Ogun State, Otunba Rotimi Paseda has renounced his membership of the All Progressives Congress (APC).

Paseda disclosed this in a letter addressed to the National Chairman of the party, Senator Abdullahi Adamu dated 18th July, 2022.
The 2015 Unity Party of Nigeria (UPN) governorship candidate in Ogun state hinged his decision on personal conviction that the party is losing its political dominance with faulting party system which influenced his interest in joining the party initially.

According to him, the erroneous choice of Prince Dapo Abiodun as the governorship candidate of the party in Ogun State for 2023 will not earn the party the needed victory.
“Sir, the decision to terminate my membership of this great party was borne out of my personal conviction, having x-rayed the event that led me into joining the party, and having worked for the party, particularly with our collective efforts that lead to the winning of for the 2019 governorship election in the state.

“I am of the strong opinion that it would be unwise, in my usual character, to remain in the party with a faulty, faulted and erroneous choice of the party governorship candidate that will not earn the party the needed electoral victory at the 2023 poll.
“Though, it is a painful decision, considering the vacuum which my exit will create with my various groups of APC card carrying members in the state, 6000 Reformed OPC members, 2000 Ijebu Youth Association members and thousands of various Paseda Movement loyalists, as the National resuscitator, sole financier and 2015 Governorship candidate of the Unity Party of Nigeria (UPN) and the 2019 Governorship Candidate of the Social Democratic Party (SDP). Having made extensive consultations it has become necessary that I make this move.

“Mr. Chairman sir, no doubt, I’ll be missing some of my colleagues with whom we have worked together within the period of my stay in the party. I’m however left with no option than taking the decision which I have just done.
“I, however, want to believe and hope that we all will surely meet again at a better and more rewarding platform that will catapult us towards achieving our political goal.” 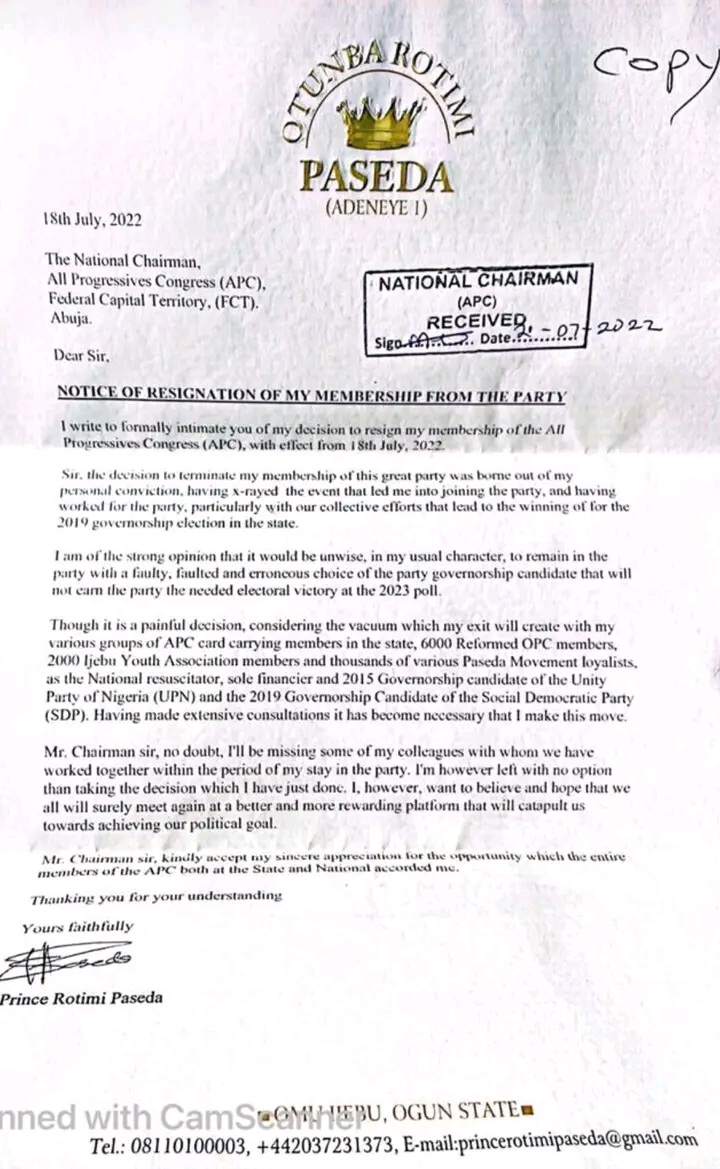