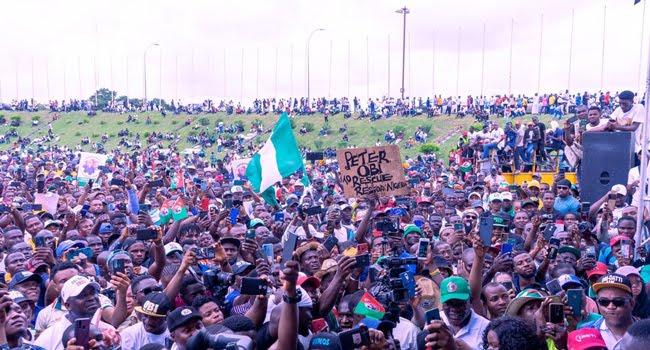 NEWSUPDATES247 report that the Supporters of the presidential candidate of the Labour Party, Peter Obi, trooped out at the Lekki area to rally in support of Obi.

On Saturday morning, October 1, the supporters, known as the ‘Obidients’, were seen in mass number as they marched at the Lekki-Epe Expressway, chanting ‘Obi! Obidient!’
Sharing a video on Twitter, a tweep, @Nkemchor posted, “The police presence at Lekki did not stop youths from gathering. Very proud of this generation. If Lekki is your route join them!”

@eklepatience tweeted, “All we want is a genuine leader that’s ready to serve Nigerians we’re not asking for too much nah just give us Peter Obi. Festac Lagos is Obidient.”
According to tweeps, who shared images, the rally also seemed to be holding in other parts of Lagos, like Festac town, Surulere and the National Stadium.

READ MORE   Reconciliation: We won’t give up on Wike, others – PDP

Another tweep, @BensonIbeabuchi, tweeted, “Youths defy rainfall to come out in support of the Labour Party presidential candidate Peter Obi at Lekki, Lagos on October 1, 2022.”
Gridlocks have now been recorded around the Lekki area as the Obidients continued their rally.