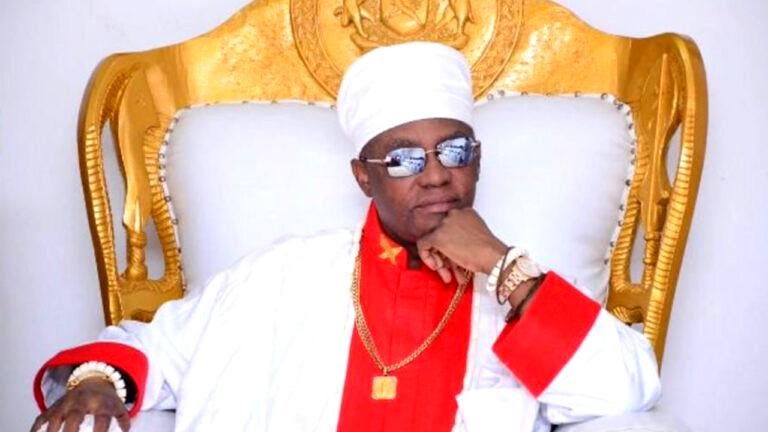 Two artefacts which were stolen from the Oba’s Palace during the 1897 expedition by the British were on Saturday returned to the Oba of Benin, Oba Ewuare 11.

At the ceremony held at the palace ground of the Oba of Benin, the Nigeria High Commissioner to the United Kingdom, Ambassador Sarafa Ishola, charged Benin people to cooperate with Oba Ewuare 11 so as to ensure that the artefacts are in good shape just as they have been in the last 125 years since they were stolen and taken to the United Kingdom.

The two bronze artefacts are a cockerel (okpa in Benin) and the bust of an Oba Uhunilao which were brought back from Jesus College, Cambridge and Aberdeen in Scotland respectively.

Ambassador Ishola who stood in for President Muhammadu Buhari said that he had a presidential directive to personally hand over the artefacts to the Benin monarch for safe keeping.

He said: “Benin people should cooperate with the Oba to ensure that the artefacts are in good shape just like they have been since 1897when they were taken to the United Kingdom. That is for over 125 years ago.”

Director General of the National Commission for Museum and Monuments, Professor Abba Isa Tijani, said that he was very happy that the first set of the looted artefacts which are over 10,000 were being returned during his time as boss of NCMM.

Tijani said that the artefacts are not just art works but define the history, culture and daily lives of Benin people.

Oba Ewuare 11, who commendedt President Buhari, said that international scholars and most museums now agree that keeping stolen artefacts is immoral and illegal.

He said: “There is consensus now that heritage items must be returned to their places of origin. For this, we commend both Jesus College of Cambridge University and the University of Aberdeen for this pacesetting initiative in returning these two bronzes.”