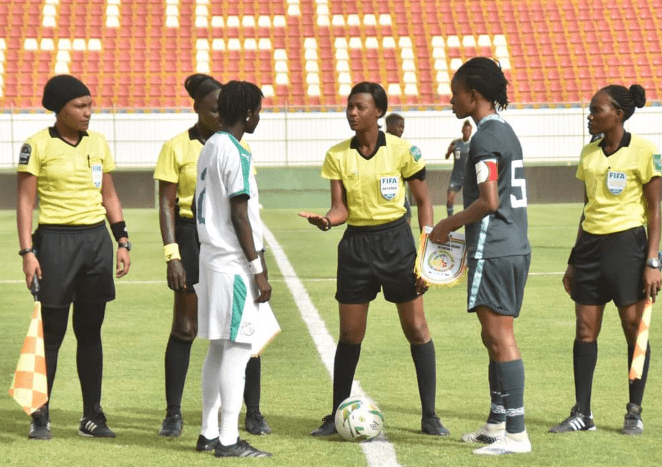 The Senegalese were flying high on the road to the Mundial, but the young Nigerian ladies sent them to the cleaners in Thies

Senegal U20 women’s coach Aicha Henriette Ndiaye has not given up hope of leading the West Africans to the FIFA U-20 Women’s World Cup despite losing 3-1 at home to Nigeria’s Falconets on Saturday.

The Senegalese were confident ahead of the first leg of the final qualifying round clash against the two-time African champions at the Stade Lat-Dior in Thies.

The Ndiaye-led team had gotten to this stage by impressively outclassing Mali, Guinea, and Morocco.

FT in Thies| Our Falconets put one hand on the ticket to FIFA U20 Women’s World Cup, Costa Rica 2022. Second leg comes up in Benin on March 26

But Falconets, two-time World Cup silver medallists, were a different class and the Christopher Danjuma-tutored ladies left no one in doubt of their quality with a convincing victory.

Edo Queens forward Flourish Sebastine hit a brilliant hat-trick in the encounter to hand Nigeria a massive advantage ahead of the return leg at the Samuel Ogbemudia Stadium, Benin City, on March 25.

Still, Senegal’s outspoken gaffer Ndiaye insists all hope is not lost and has warned her West African neighbours to be ready for war when the two sides meet again in a fortnight.

“Nothing is impossible; we will continue to believe in ourselves despite this defeat (3-1) in the first leg, especially since we can improve on several aspects,” the tactician told Cafonline.

“At first, we must correct all the mistakes made in the first leg, and also now; we are no longer going into the unknown when we lacked information on this Nigerian team, unlike our first three opponents, namely, Mali, Guinea, and Morocco.

“And if we recover the absent players this evening, I say why not go and succeed at their home [in Benin City], which they did here.”

Ndiaye will meet her match in Falconets’ head coach Christopher Danjuma, a veteran of African women’s football and former handler of the senior national team, the Super Falcons.

After guiding the Falconets to a comfortable win in Senegal, the 2019 All African Games gold medal-winning coach maintains that his charges will not be complacent in the second leg.

“We had a good result here with this 3-1 away win, but in football, until the referee blows the whistle for the end of the game, you can’t say you’re qualified,” coach Danjuma said.

“This means that we are going to prepare for the return leg, forgetting the result obtained this Saturday against a very talented Senegalese team.

“Moreover, for this first leg, we tried to put the odds on our side by finding as much information as possible on this Senegalese team which nevertheless eliminated Morocco that is doing a good job in women’s football.

“As in the first leg, we have to be mentally ready to stay the course.”

An African powerhouse, Nigeria’s Falconets have qualified for every edition of the FIFA U-20 Women’s World Cup and have been runners-up twice, losing to Germany on both occasions in 2010 and 2014.