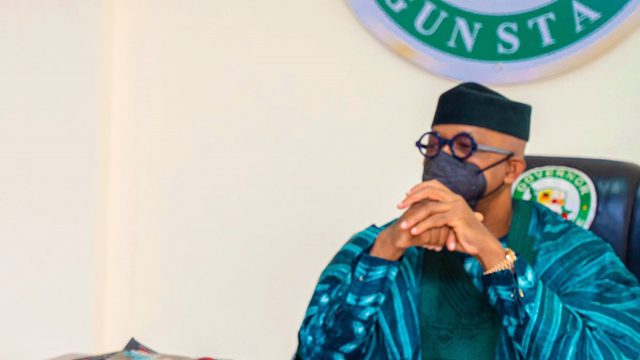 The Ogun State Government has vowed to protect the lives and property of residents in the state, saying every step would be taken to make the state unsafe for terrorists, killer herdsmen and kidnappers.

This was disclosed by the State Chairman of Amotekun, Mr Dave Akinyemi, who said that the government is already collaborating with neighbouring states like Oyo and Lagos to comb its forests and smoke out those who are harbingers of destruction.
It would be recalled that the state has witnessed an upsurge in criminal activities, with suspected Fulani herdsmen unleashing mayhem on motorists on the Lagos-Ibadan Expressway.

In the same vein, eight villages in the Imeko-Afon Local Government Area of the state was also recently attacked by murderous herders as well as the violent exchange between herdsmen and some Ohori farmers at Idofa village, which left five persons dead, and property worth millions of naira destroyed.

Akinyemi, a retired police commissioner said the provision of adequate security has been a cardinal and focal point of Governor Dapo Abiodun since assuming office.
According to him, with the resurgence in cases of kidnapping on the Lagos-Ibadan Expressway, Amotekun personnel in Ogun and Oyo States are now combing the forests to dislodge the terrorists, a move that he said, has been yielding positive results.

Akinyemi noted that it will preposterous to suggest that Governor Abiodun or any other governor in the Southwest had been playing politics with the lives of the people.
According to him, the Abiodun-led administration is not unaware of its constitutional responsibility to secure the lives and property of its citizens and is doing so in many areas.
He said that the state government had concluded arrangements to fortify all the 20 local government areas of the state with Amotekun operatives. This will be complemented by some operatives, who recently concluded their training and are waiting to be mobilized.
The Amotekun boss also noted that the Corps has been collaborating with the Army, Police, Department of State Services (DSS), Nigerian Security and Civil Defence Corps (NSCDC) among others to rid the state of criminals.
He disclosed that the inter-agency cooperation has led to the arrest of over 50 cultists and other hoodlums in Sagamu and other areas in Ogun East.
Akinyemi said the security situation in Ogun State is a peculiar one; the state shares a border with the nation’s commercial capital, with international borders that are porous and easily accessible by criminals.

There are also threats by armed herders from the North, and by local outlaws.
He, however, assured that the state will rout the criminals with superior firepower, adding that the government has spent so much to upgrade the security architecture of the state, adding that Ogun will continue to remain the most peaceful state in the country.