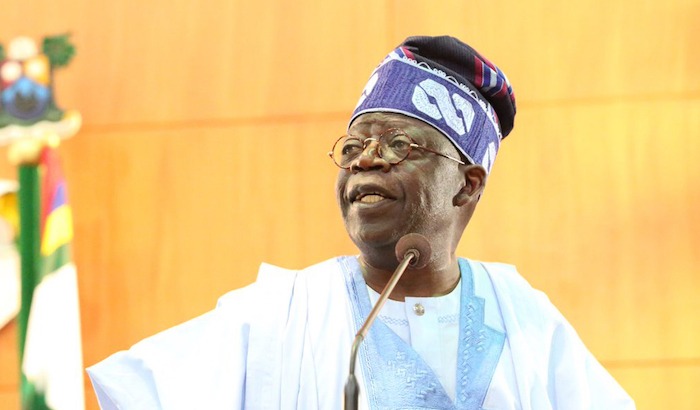 A former Lagos State Governor and presidential hopeful, Asiwaju Bola Ahmed Tinubu, on Thursday said Nigeria’s democracy has remained unstable, because it was buffeted by insecurity, hopelessness, lack of education and general suffering in the land.
He, however, said the reason he decided to join the race for president in 2023, was because he wanted to fix things by ushering hope and real change into the country.
Tinubu told all Nigerian patriots that, the country needed a competent leader at this present time of its journey, who could unite the people, tackle insecurity and rejig the debilitating economy for the benefit of the masses.
He spoke in Ado-Ekiti, the Ekiti State capital, in continuation of his consultations with members of the Ekiti State Council of Traditional Rulers in furtherance of his 2023 presidential aspiration.
The former Lagos State governor was accompanied to the venue of the meeting held at the Traditional Council Chambers, by the Deputy Governor, Bisi Egbeyemi and top brass of the Southwest Agenda 2023, led by Senator Dayo Adeyeye.
Addressing the Council, presided over by the Chairman, Council and Onisan of Isan Ekiti, Oba Gabriel Adejumo, Tinubu averred that he was in the state to consult the traditional rulers that he would be contesting the 2023 presidency, so that he could get their prayers and support.
“We have struggled for democracy and today, we have democracy, but we are  not stable yet. There is insecurity, hopelessness, lack of education, and suffering in the land. By now, we should have a good farming system and opportunities to produce for other nations to buy.
“We are here to answer the call of our children by educating them the right way, so that we can leave a Nigeria that is united, prosperous and abundant for them. We chose democracy and we must not fail in this task.
“I’m contesting this race to renew the hope and make the future great for our children. For Nigeria to stand united and develop, we require patience and wisdom. We have to be united, that is the only way we can be great.
“That was why we formed APC based on principles. I want to tell you that Nigeria needs serious change. I knew how Lagos was when I took over and we had never failed any election. There must be continuity in governance for progress to be attained.
“I was the first governor in Nigeria to start paying the WAEC fees of secondary school students. I shall do it again as a President,” he said, adding that he decided to consult the traditional rulers before declaring, because of the enormous respect he placed on culture and tradition.
His words: “I have been on Nigeria’s project since the 70’s. I was with MKO Abiola in SDP. I was a senator before he came out. I was the youngest senator of that era. I was about becoming Director of Finance of ExxonMobil, but I rejected it.
“I said I wanted to serve Nigeria. They gave me a leave of absence to go and do politics for four years and come back, but I only spent two years as a senator, when military came and terminated our tenure.
“But I have an option, which was to either go back and enjoy at ExxonMobil, but I decided that I will fight for Nigeria instead of going back to enjoy. We believed that there must be democracy in Nigeria, there must be freedom and there must be opportunities.
“We joined hands with Soyinka, Enahoro and others. Governor Kayode Fayemi was in University of London then, brilliant and he joined the struggle. He worked so hard, in fact, he is an excellent man. So, looking at all these, we should all know that this democracy must not fail.
“We have to collaborate, unite and promote ourselves instead of fighting. We all see what is happening in Ukraine today, we don’t need such experience here. We must elevate our technology and make use of available opportunities to develop Nigeria and that is what we are coming to do.”
Adeyeye said Tinubu had made great investment to the development of Ekiti in terms of human resources and that the traditional rulers must appreciate him.
“That APC is in Ekiti today is traceable to God and Tinubu. He struggled for it and restored progressive politics here. He has made many Ekiti people commissioners, Special Advisers and local government chairmen in Lagos.
“Tinubu honoured our own hero in Ekiti, Adekunle Fajuyi by building a house for him. He had helped so many people, including myself. Tinubu brought a paradigm shift to Lagos governance, in fact, he is a miracle worker. As a governor of Lagos State, he was ranked first and no wonder he remained the last man standing when the then AD lost grip of the Southwest.
“That was why many of us dragged him into the presidential race to replicate what he had done in Lagos at the national level. Nobody can stand shoulder to shoulder out of all the presidential aspirants across party lines with him. He is the best builder of men in the history of Nigeria. This is the best man at this moment to rule Nigeria for serious business of development,” he said.
Speaking on behalf of the council, Oba Adejumo, said the constitution permitted every qualified Nigerians to aspire for any position, and prayed God to help him realise his ambition.
Victor Ogunje in Ado Ekiti