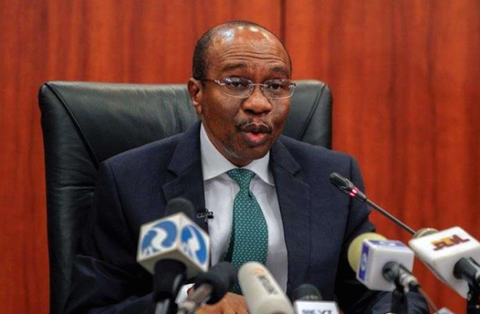 The Kaduna chapter of the “Pro-Godwin Ifeanyi Emefiele for President 2023,” has asked the Central Bank of Nigeria (CBN) Governor to join the race for the presidential election.

Chairman of the group, Mohammed Omale, made the call at a meeting organised by his members in Kaduna, on Sunday.
Omale said the CBN governor has devoted his time and energy towards building a strong financial system that would lead to the growth and development of the Nigerian economy.
He added that Emefiele, “has demonstrated the capability and ability to lead this great country to the promise land.”

The group therefore, urged the CBN governor to run for the presidency in 2023, maintaining that his track records at the CBN, are indication that he would transform Nigeria for the better if elected president.
“As patriotic citizens of the federal republic of Nigeria, strong believers in democracy and advocates for a greater Nigeria built on a solid economic foundation, we declare support for the current governor of the Central Bank Nigeria, Mr. Godwin Ifeanyi Emefiele for President of the Federal Republic of Nigeria,” Omale said.
The group added: “Emifiele is a well-known Nigerian economist and one of the best CBN Governor Nigeria has ever had in history.

“He designed bank policies and program that has led to many jobs creation and drive economic growth.
“He promoted agricultural development through anchor borrowers’ schemes which has yielded great success in all parts of the country regardless of religion or tribe.”
He said, “One good example of Emefiele’s achievements is the maize production by Maize Association of Nigeria (MAAN) facilitated by the favourable agricultural policies of the CBN under Emefiele.”
He said launching of the biggest maize pyramid in Kaduna reduced the price of the commodity in the market.
The group said, “Nigerians are happy especially the less privilege as many youths were empowered through ABP direct and indirect production and processing.

“Many farms produce processing companies were established, especially in maize. Modern technology systems were introduced in agricultural farming systems.
“He has ensured stable economy in Nigeria by engaging the fiscal authority through various interventions.
“He has worked tirelessly to see that Nigerian economy is among the 25th world best economy globally.”
Omale further commended Emefiele for preventing series of naira devaluation and excess pressure on the currency by introducing multiple exchange rate regime.
“He has devoted his time and energy towards building a strong financial system that will lead to the growth and development of the Nigerian economy therefore he has demonstrated the capability and ability to lead this great country to the promise land.
“His policies and strategy have been able to direct the Nigerian economy through bad times such as recession, Inflation and stagnation.

“He has also supported the oil and gas industry through intervention schemes that has led to new private refinery and other modular refinery within the country.
“With these we hereby urge Mr. Godwin Ifeanyi Emefiele to contest for president of federal republic of Nigeria to save our nation and our economy.
“We also urge all meaningful Nigerians to vote for a better Nigeria”, the group said.
John Shiklam in Kaduna