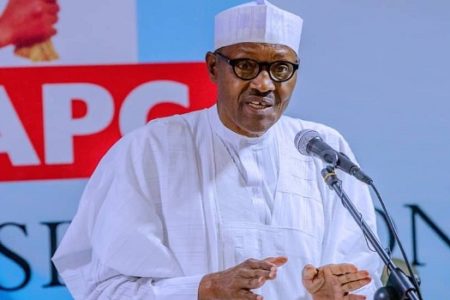 President Muhammadu Buhari Tuesday met with governors of the ruling All Progressives Congress (APC) at the State House, Abuja, to discuss the forthcoming national convention of the party scheduled for March 26, 2022.

At the meeting attended by 11 out of the 22 APC governors at the President’s office, President Buhari was said to have turned down the governors request for him to have a rethink about his support for former governor of Nasarawa state and Senator representing Nasarawa West in the National Assembly, Senator Abdullahi Adamu, as national chairman of the party.

The President, who met with the governors shortly before departing for Nairobi, Kenya to attend a four-day international summit, said no to the attempt by the governors to get him to change his mind on the former Nasarawa State governor who has since emerged as the President’s favourite for the party’s top job.

He was said to have bluntly refused to shift ground when the governors advanced their reasons against the ranking Senator emerging as national chairman.

The governors were said to have expressed their desire to allow all those that have signified interest in the national chairmanship of the party to be allowed to run which the President rejected.

Southeast APC governors were also said to have complained about the zoning of the office of the national secretary to South West rather than their region, with Chairman of the Progressive Governors Forum(PGF) and Governor of Kebbi State, Atiku Bagudu, who led the team to meet with the President, telling them that it was too late to amend the zoning formula.

Despite the position of the chairman of the Progressives Governors Forum, the Southeast governors were said to have resolved to take their agitation for the party Scribe position to a meeting of the APC governors that was scheduled to hold on Tuesday night at Kebbi state Governor’s Lodge in Asokoro, Abuja.

Chairman of the APC Extraordinary Convention Planning Committee, (CECPC) and Yobe State governor, Mai Mala Buni, was however absent at the meeting.

At the end of the meeting with the President, the governors affirmed that there was no plan to move the national convention of the party from the scheduled date of March 26 in Abuja despite the tight time frame provided by the time table of the Independent National Electoral Commission (INEC) just released for next year’s general election.