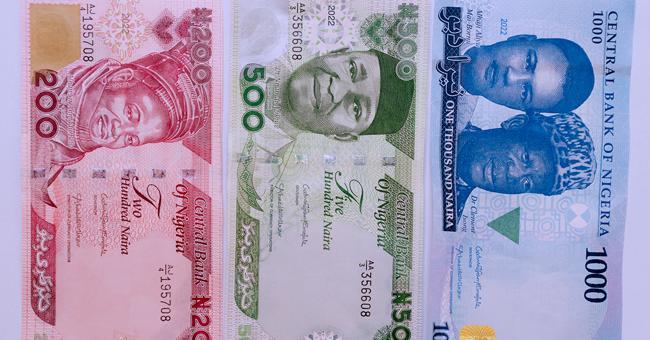 Nigeria’s newly redesigned 200, 500 and 1000 naira notes will go into circulation on Thursday (today).

Deposit Money Banks are expected to release the bills to their customers via over-the-counter payments.
This came about three weeks after President Muhammadu Buhari, unveiled the new bills at a weekly Federal Executive Council meeting in Aso Rock Villa.
The President unveiled the redesigned notes across the N200, N500 and N1,000 denominations.

The Governor, Central Bank of Nigeria, Godwin Emefiele, had in October announced that apex bank would release re-designed naira notes by December 15, 2022.
He also disclosed that the old notes would cease to be regarded as legal tender by January 31, 2023.
Emefiele pointed out that the redesigning of the naira notes would help to curb counterfeit notes, and reduce ransom payments to terrorists and kidnappers.

The CBN boss said it was worrisome that 85 per cent of the total currency in circulation was being hoarded by Nigerians.
As such, he said the redesigning of the local currency would help to mop up the currency outside the banking sector, adding that out of about N3.3tn in circulation, close to N2.75tn were outside the banking sector.
Meanwhile, top officials of commercial banks confirmed to our correspondent on Wednesday they had received the new notes from the CBN a couple of days ago, adding that the redesigned currency would be released to their customers effective Thursday (today).

We got the funds (new notes) about two days ago. Our head office has dispatched the funds to various area offices across the country. My branch will pick up our allocation at a nearby area office. We will start releasing the new notes to our customers by Thursday,” according to a top official of a commercial bank who spoke to one of our correspondents on condition of anonymity on Wednesday because he was not authorised to speak on the matter.
Multiple banking sources also said the new notes had arrived and were being kept in their vaults.

However, some bank officials claimed the amount of the new notes available to the various bank from the CBN was small.
According to them, most OTC payments will still have to be made using the old notes because the amount of the available new notes is still small.
“The amount given to us is small compared to what we need. For example, what is available to my branch is less than N1m. This is nothing compared to what we need. But I believe it will increase with time,” an official of FCMB in Lagos who pleaded anonymity told one of our correspondents.

Also, multiple banking sources confirmed they have started to reconfigure their ATMs to identify the new naira notes.
A top bank executive said, “Most of the banks have started reconfiguring their ATMs so that they can identify the new notes of N1000, N500 and N200.,”’
Meanwhile, findings from the CBN show the total amount to be released into circulation may not be much as the sum previously in circulation.

A top official of the CBN, who spoke on condition of anonymity, said the CBN was planning to increase electronic payments and not cash transactions.
According to him, the CBN will not be printing large amount of the new notes.
He said, “The CBN has been disbursing the new naira notes to the banks but does not intend to disburse large quantities because it wants to boost electronic payments.

“Don’t expect that there will be a large circulation of the new notes in the economy. There are different electronic channels that people should be using”.