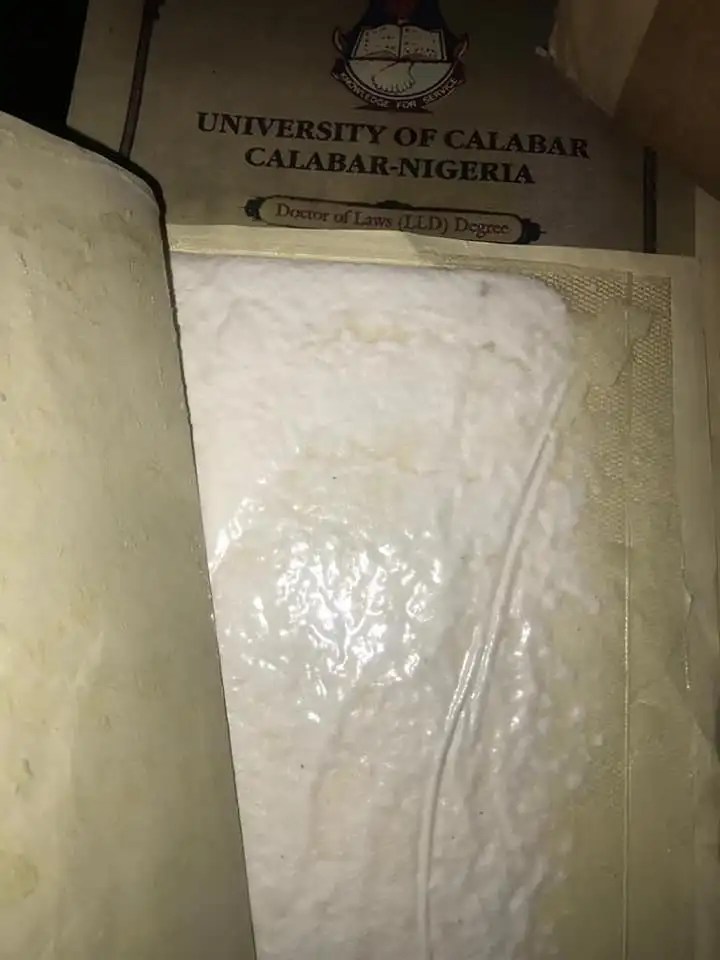 The NDLEA’s spokesperson, Femi Babafemi, who said this in a statement on Sunday, in Abuja, added that the suspect was arrested for importing variants of liquid cannabis weighing 49.6gms, from the U.S.

Mr Babafemi said that he was arrested through controlled delivery, along with his accomplice, Precious Awuse, on Monday, September 27, around NIPOST area, Port Harcourt.

In a similar vein, narcotic officers attached to some courier firms in Lagos have seized different sizes of illicit drugs, including 40gms of cocaine, concealed in a University of Uyo degree certificate, heading to Australia.

The NDLEA spokesman said that another 280 gms of cannabis, hidden in body cream bottles going to Cyprus; and another 400gms of tramadol, tucked in plastic bottles, heading to Australia, were also seized, just as a one kilogramme of methamphetamine, concealed in auto parts, with Hong Kong as destination, were similarly seized.

“Attempts by some traffickers to also import into Nigeria 20 cartons of khat weighing 126.900 kgs were also quashed.

“This was through the Nigerian Aviation Handling Company (NAHCO) import shed of the Murtala Mohammed International Airport, MMIA, Lagos,” he said.

He said that the operatives also arrested a widow, Aliya Idris on Saturday, September 25 in the house of a wanted drug dealer, Shamsu Boda, at Joji Road, Tudun Wada, Zaria, Kaduna state, having been found in possession of  30 bottles of cough syrup with codeine, and 20 sachets of Rophynol with gross weight of 4.2kg and 77.5 gms, respectively.

Similar arrests were also made by the drugs agency of  a 22-year-old Peter Onome, from Isoko, Delta State, with 442 gms of different types of drugs, including 426 gms of cannabis sativa, 15 gms of Colorado, six grams of Cocaine; four grams of Rohypnol and one gram of methamphetamine.

“In Lekki, one Justin Clement, from Michika, Adamawa State, was also arrested with 500 gms of cannabis sativa.

“Also, on the same day, officers of the Lagos Command of the agency raided another notorious hideout in Petti, Lagos Island, where they recovered an abandoned 1,213.2kg of cannabis sativa,” Mr Babafemi added.

In his reaction, Buba Marwa, the NDLEA chief executive, commended officers and men of the Rivers, DOGI, MMIA, Kaduna and Lagos Commands of the Agency for their outstanding performance in the past week.

He charged them and their counterparts in other commands to remain vigilant and continue to exhibit the spirit and determination of the new NDLEA.