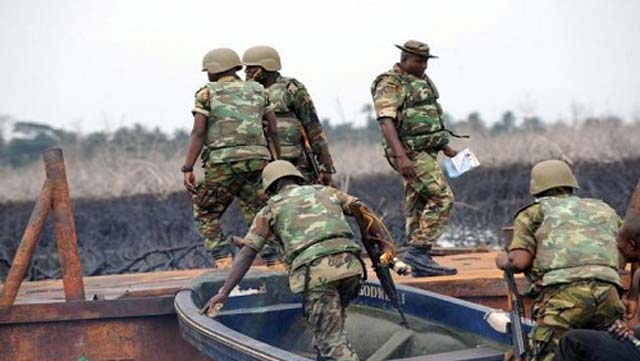 Okehie, who served as commander for nine months, said that they carried out various kinetic operations involving several clearance of sea robbers and militants.

He warned criminals in the state, especially those operating on the waterways to desist from the act, adding that the Navy would deal ruthlessly with anyone perpetrating any form of criminality.

He said that under his command during the period, NNSV made some modest achievements touching across the deliverables as contained in the Chief of Naval the Staff Strategic Directives.

“In this regard, NNSV as one of the Type A Operations Base played a critical role in ensuring sustained presence and ensuring credible deterrence within its designated Maritime Area of Operations.

“In this regard, it is worthy of note that the base destroyed six camps which led to the release of some kidnapped victims, recovery of weapons and other valuable items.

“Furthermore, the base made significant efforts in curbing smuggling and illegal bunkering activities,” he said.

The ex-commander further said that the NNSV patrol team arrested a wooden boat laden with 1,209 foreign bags of parboiled rice in September 2021, valued at over N36.2 million.

“Indeed, I consider it a rare privilege and by God’s divine favour to have had a most rewarding and successful command for all we have collectively achieved under my tenure,” he said.

The new NNSV commander, Commodore Ifeanyi Okpala, warned criminals, especially sea robbers and kidnappers operating within the Calabar water ways and beyond to steer clear as they would be ruthlessly dealt with.

“Every criminal operating in Cross River, both on land and our waterways must leave now or face a ruthless force as the Navy will not tolerate any form of criminality,’’ Okpala warned.

He lauded his predecessor for the standard put in place and urged the officers and men to support him in his quest to achieve more for the Navy.

He said that Cross River was no longer a safe haven and there was no more hiding place for criminals.