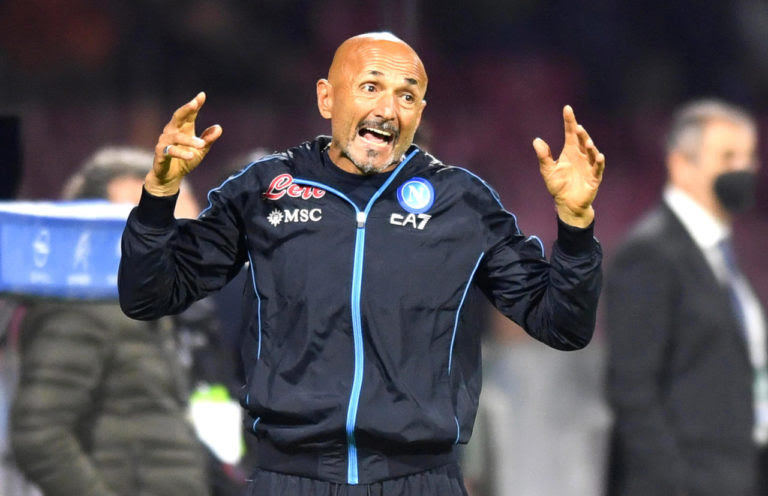 Napoli manager Luciano Spalletti heaped plaudits on his players following their hard-fought 2-1 win against Lazio on Sunday.
Fabian Ruiz netted deep into stoppage time to hand all three points to the Partenopei.
Spalletti praised his side for fighting hard to win the game.
“The team played good football in the second half, and it’s true that Pedro’s wondergoal got Lazio on level terms, but we had numerous chances before that, the goal that was disallowed and the one that was cleared off the line,” Spalletti told DAZN.
“I think overall the team deserved the victory. I want to underline that everyone keeps moaning that this team doesn’t have character, it’s soft, it’s sluggish, I want to hear them say that now.

“This team definitely has character. People said we couldn’t draw with Cagliari, but they went to beat Torino away from home today.
“We lost to Barcelona after getting a result at Camp Nou, it was my fault because I told them to take that approach.
“I see an ugly atmosphere around this team, people trying to say we lack character. I want to see them say that now.
“There are many games, but this team has potential, it has character and showed it tonight. This is not the same Lazio that we beat earlier this season, because they play good football, they work together to press and attack you, so we were wide awake.
“People go take Fabian off, take him off, take him off: I leave him on and he scores! This is a team challenging for a high level of the table, that has generally played good football. I don’t know what people try to drag us into, perhaps because they are afraid to face opponents like this with open football, but my players are not afraid.
“We got knocked down, we got straight back on our feet again and poured forward to find the winner. I don’t think it’s a bad thing to say this was a deserved victory.”
Fastest Paying Betting Site in Nigeria: Grab your 140% First Time Deposit Bonus Now — www.Sportybet.Com Copyright © 2021 Completesports.com All rights reserved. The information contained in Completesports.com may not be published, broadcast, rewritten, or redistributed without the prior written authority of Completesports.com.

Iwobi Thrilled With Performance Despite Everton’s Defeat To Man City