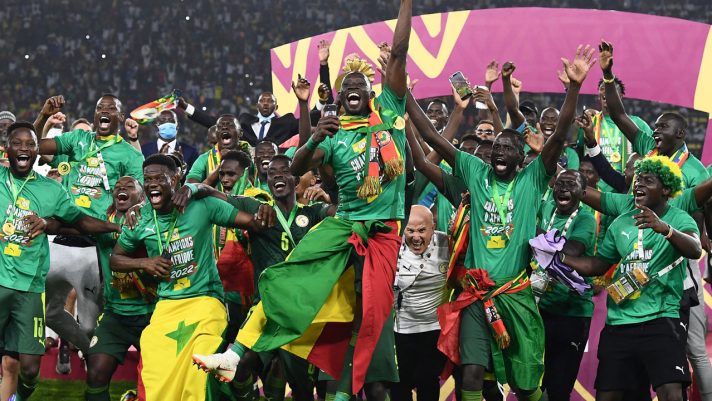 When Patrice Motsepe was elected African football supremo, he could never have imagined visiting grieving Cameroonians in the build-up to the Cup of Nations final less than one year later.

A 24-team tournament designed to bring joy to the continent was enveloped in sadness on January 24 after eight men, women and children were crushed to death at the Stade Olembe in Yaounde.

They went to a stadium built for the event to cheer their beloved national team, the Indomitable Lions, but never returned home to recount how the hosts triumphed 2-1 and reached the quarter-finals.

Confederation of African Football (CAF) president Motsepe told the mourning families: “We are going, with the government, to stand by you in this difficult ordeal because you must not be alone.”

A Cup of Nations delayed three years by slow construction, the coronavirus and unfavourable weather conditions delivered drama on and off the field and AFP Sport recalls what some of those involved said:

“If that gate was open, as it was supposed to be, we would not have had this problem, this loss of life. Who closed that gate?”

“We cannot feel the same pain as you but we have come to offer you the condolences and solidarity of the entire African football family and CAF.”

— Motsepe talks to families of deceased

“In January, there is a little tournament in Africa.”

— Klopp responds to Cisse and other critics

“There is this invisible monster that is the Africa Cup of Nations, which takes players from the locker room without us knowing when they will return.”

“They (European clubs) do not realise how important the AFCON (Cup of Nations) is for African people — it is more important than the World Cup.”

“Cameroon is a unique country, a football country. My only regret is not being able to participate as a player.”

“I cannot bring in a player who could blow up the team, even if he is called Lionel Messi.”

“It was small of them, but that is how it is with small teams.”

“We are Ghana and we will win our last match and qualify.”

“We played beautiful football, and that is the goal of this tournament.”

“We win, we lose. We gave everything. Hopefully, we will come back stronger.”

“Oscar Wilde said if you aim for the moon, you will land among the stars. We wanted to break the world (unbeaten) record but have not managed.”

“Do not point fingers at players who have given you so much happiness.”

“Sometimes we come to a match expecting a samba, but it turns out to be a tango.”

“The national team is like a house without walls, windows or doors. Those who can help enter and it remains open to all.”

“Playing in Africa is not like in Asia or Europe, it is more difficult. You have to be mentally strong to face these conditions.”

— Widely travelled Queiroz on competing at the Cup of Nations

“I cannot explain that goal. You could have Jurgen Klopp or Pep Guardiola in charge and they would not have been able to prepare for that.”

“I think it is a disaster.”

“What does not kill you makes you stronger.”

“We are not here as a favour or by chance. We deserve to be in Cameroon.”

— Tom Saintfiet, the Belgian coach of the Gambia, who defied being the lowest ranked team in Cameroon by reaching the quarter-finals