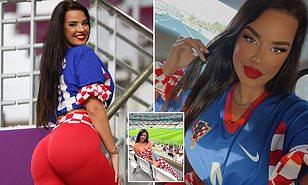 Model Ivana Knoll is bidding farewell to the World Cup and celebrating her new-found fame which has put it on a similar scale as the stars of the Croatian team.

The Instagram star now has 3.1 million followers and at one time during her stay in Qatar she was garnering 200,000 followers a day.

As she made her way to the Croatia and Morocco game today, she told Mailonline: ‘The number of people who like me around the world is almost the same as the population of my country.
‘The World Cup was amazing and I am sad it’s almost over.
‘As regards to my Instagram account, I could never have dreamt this could happen to me.

‘I came here with 570,000 followers, now I have 3.2million and that does make me smile.
It is almost the same number as the population of my country.’
She has been mobbed wherever she ventured to football stadiums for the World Cup as fans request selfies and hug her.
‘We are such a small country but with huge successes.

‘At the last World Cup we were finalists and 2nd and now we are in top four teams in the world and playing today for the bronze.’
Laughing, she added: ‘And they have the most famous fan. I am excited about my future and happy that I also have fans all around the world as well as in Croatia.’
Ivana, who spends her time between Zagreb and Miami, has been front page news in her home country and was welcomed to events by FIFA after she featured on stadium screens during matches.

On Friday, Qatar invited her to a dinner but she had to cast aside her skimpy outfits and appear in a red over the knee evening dress.
She admitted that she had been anxious about not conforming to Qatar’s strict clothing requirements and has inevitably suffered internet trolling and abuse.
But she added: ‘I am only having fun. People find me attractive and I don’t see anything wrong with that!’