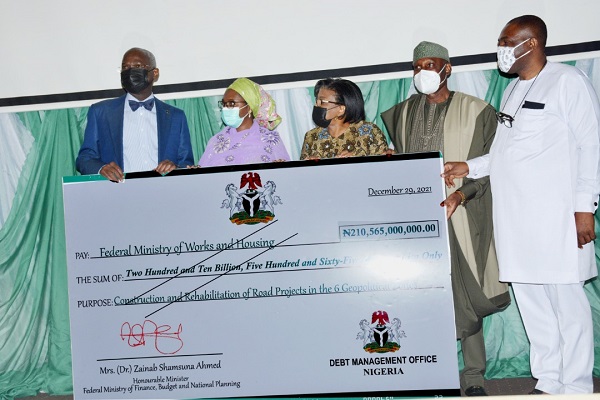 The Federal Ministry of Works and Housing on Thursday received a cheque of N210 billion of SUKUK funding for the execution of critical road projects across the country.

The SUKUK, which is a form of Public Private Partnership (PPP), was among the funding options adopted by the Federal Government under President Muhammadu Buhari to fund the construction of critical roads in Nigeria.According to a statement by the Director of Press and Public Relations of the Ministry, Mrs Boade Akinola, at the symbolic presentation ceremony of the N250 billion Federal Government 2021 SUKUK cheque to the three beneficiary Ministries, the Minister of Works and Housing, Mr Babatunde Fashola, gave an account on how his ministry spent the previous SUKUK funds given to the ministry.

The Minister also explained that the impact of debt and borrowing on the economic lives of the people was significant; pointing out that proper usage of the debt on infrastructure in Nigeria had helped in galvanizing the economy.

He said: “Another thing to take home is that debt properly used can galvanize the economy. It is that debt instrument that serves so many people from diverse parts of Nigeria here today,” he explained.

“Wealth is distributed across when committed to infrastructure. Money moving around the economy creates consistent employment and engagement. Suppliers are at work.

Earlier, the Minister of Finance, Budget and National Planning, Mrs. (Dr.) Zainab Ahmed, disclosed that so far from 2017 to date, the total SUKUK funds issued to the Federal Ministry of Works and Housing was N362.577 billion which the Debt Management Office issued on behalf of the Federal Government for the funding of key road projects through SUKUK, stating that government has given priority to capital expenditure spending in order to sustain the momentum of the economy.

In her remarks, the Director-General of the Debt Management Office (DMO), Mrs. Patience Oniha, said that presentation of the N250 billion SUKUK cheque to the three ministries was in line with the President Muhammadu Buhari administration’s strategic objectives of development of infrastructure.

She said: “Improvement in infrastructure is widely accepted as one of the best means of creating jobs, supporting and attracting new businesses and promoting growth and development due to its multiplier effects.

“I am pleased to report that since the debut of N100 billion Sovereign SUKUK in September 2017, the DMO has issued three more, getting better each time and bringing the total amount raised through SUKUK so far to N612.577 billion.”

Kogi To Build First Holiday Village In Africa In Lokoja