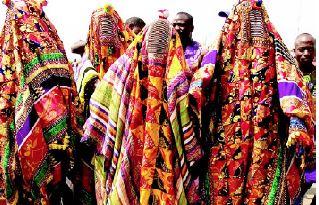 Some masquerades invaded a church (name withheld) in Shikal village of Langtang South Local Government Area of Plateau State, on Sunday, flogging worshipers as well as the pastor.

Apart from flogging the worshippers and the pastor and generally disrupting the service, the masquerades were also said to have destroyed the church’s musical equipment according to a report by Daily Trust.
The masquerades reportedly arrived the church while service was ongoing.

A witness said the church members were awe-stricken over the action of the masquerades, adding that members did not do take any counter-offensive action, but gathered to salvage what was left of their properties.

Elders of the village are said to be making efforts to get to the root of the matter in order to restore normalcy.

Hisbah Nabs Lovers for Having S3x in Zamfara Motor Park